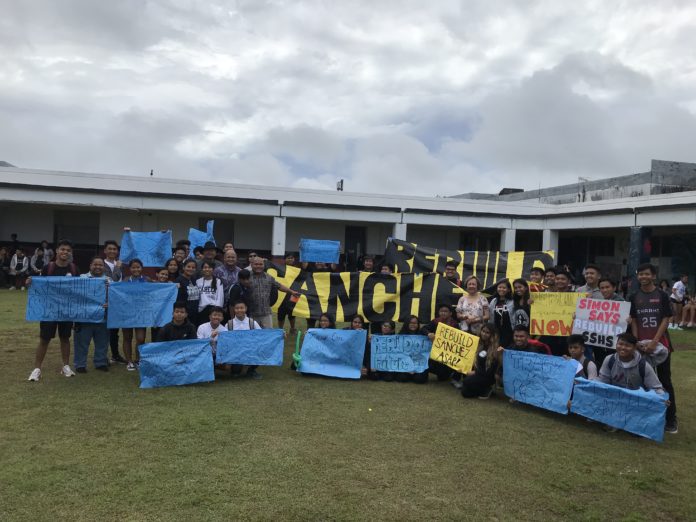 Guam – It has been seven years since students at Simon Sanchez High School began rallying for the renovation of their campus. On Friday, students held a rally voicing frustration that they do not yet have a new school building, while further expressing their support of Bill 204-34.

Last week, at a legislative session, a bill that would transfer procurement authority from the Department of Public Works to the Guam Department of Education was debated.  The change would give GDOE control over the project as the department looks toward the re-building of Simon Sanchez HS.

Holding banners and breaking into chants, students made it clear that enough is enough—they want their school rebuilt now. Students were rallying that day so that future Sharks, brothers and sisters, nieces and nephews, could continue their legacy in a new school building.

Junior Cidney Flores was a main speaker at the rally, boldly calling out the names of each senator in the 34th Guam Legislature.

“Shame on the senators who dare not vote for this bill, shame on the individuals who allow these agencies to continue to fail the home, the family here at Simon Sanchez High School, that is what we have to say if this bill is not passed,” said Flores.

When asked about their confidence in the Superintendents ability to oversee the procurement, the students expressed their trust in Fernandez, calling him an “advocate” and “our leader”, going so far as to say that if they can’t trust in him, who can they trust?

“We can no longer rely on agencies that fail to help the students here at Sanchez get a better community when they have spent seven years rebuilding bridges, roads, the congress building and museums when they could have helped out the students here at Sanchez, rather we give it to Jon Fernandez and the Board of Education who really does care about the education, the community and the quality for the students,” said Hacie San Jose.

When asked what the students thought of the recent deliberations in Session, student Cidney Flores said, “I think those are just three more days our school isn’t being built.”