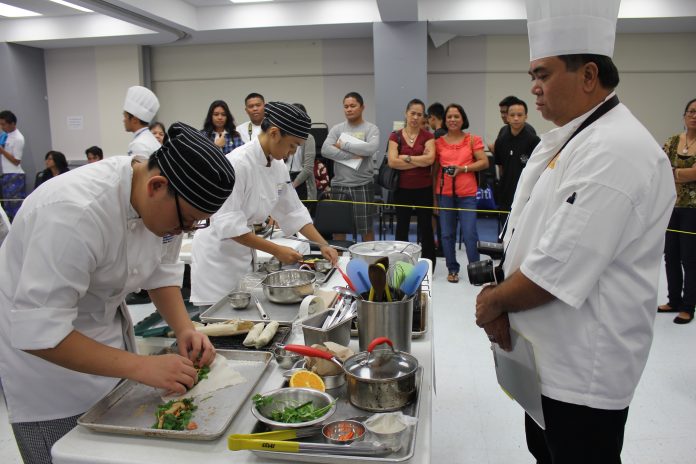 Guam – GCC has announced that for the fourth year in a row, the Simon Sanchez High School ProStart Team will represent Guam in The 13th Annual National ProStart Invitational Competition.

The fire was on and students were definitely feeling the heat as GCC ProStart students from George Washington, John F. Kennedy, Southern and Simon Sanchez High Schools competed at the GCC Auditorium this morning.

In one hour, each team will have to create a three-course meal. GCC Culinary Instructor and Floor Supervisor of the event Chef Carlos Laguana explained, “They have one hour to cook all their preliminary misem plas, which is having their equipment set up, preparation of their ingredients, over the 60-minute cooking time. It’s a great experience for the students because at a young age they can develop their skills for the industry.”

Stakes are high as last year the Guam ProStart Team from Simon Sanchez won the national competition beating 42 other teams from around the country. This year, they’d be competing again at Minnesota in May.

Returning Champion and Sanchez Team Captain Mac Daniel Dimla said they’re going to have to take cooking to another level and develop a new plan on attack. He said, “It was a great honor and being able to compete again in Prostart, it’s an amazing experience. On top of that, you have the pressure again to defend your title. I think one of the most important reason why I joined again is to teach my teammates the knowledge and techniques I’ve learned from Nationals and the past leaders that taught me so that the next competitors, they can be the next leaders of their team. That’s how this industry works, passing on the knowledge that we have.”

When asked if Guam will win again this year, Dimla answered, “The best that we had was the best in the Nationals, so I don’t guarantee it, but there is this big chance we’ll defend our title in the Nationals.” 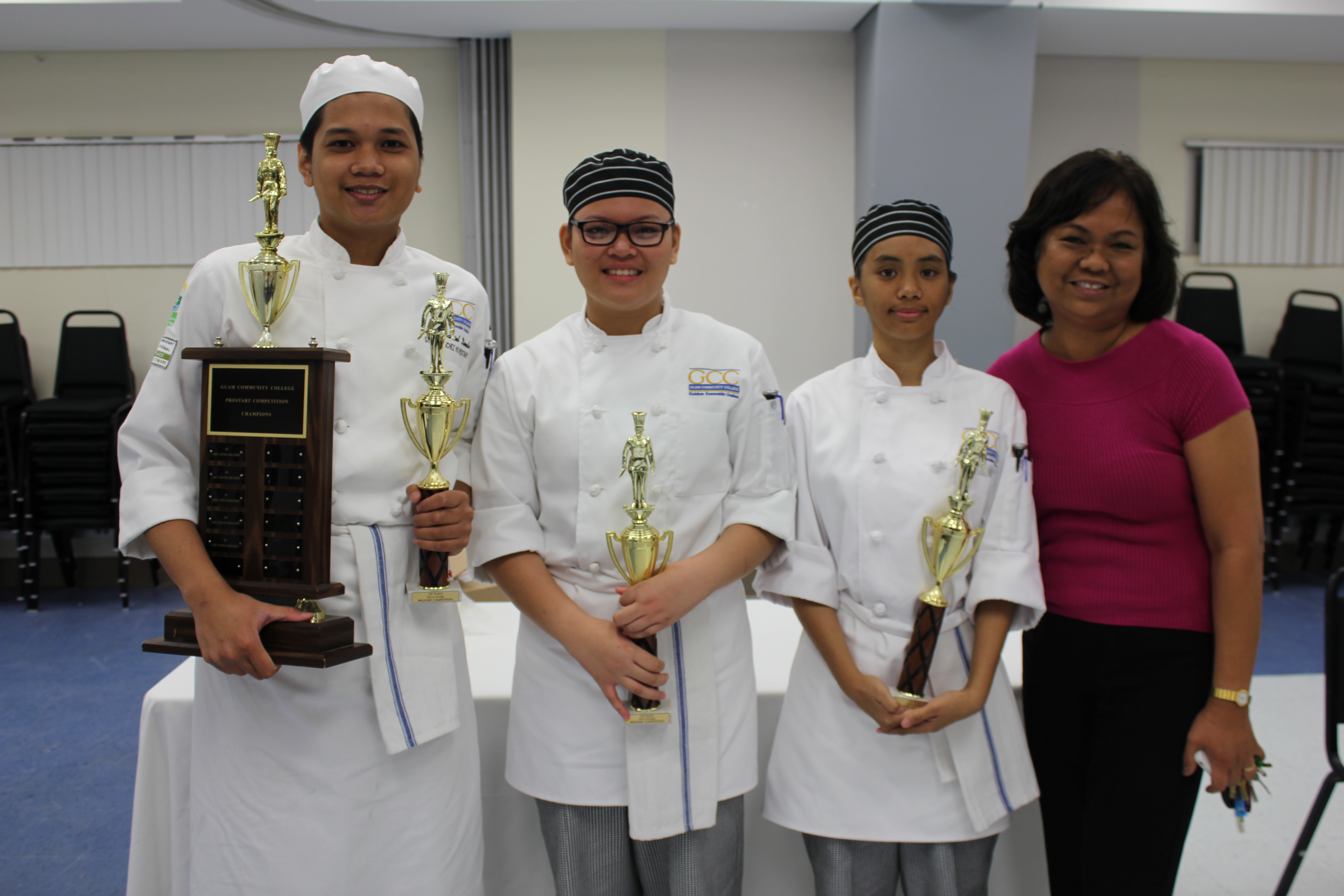 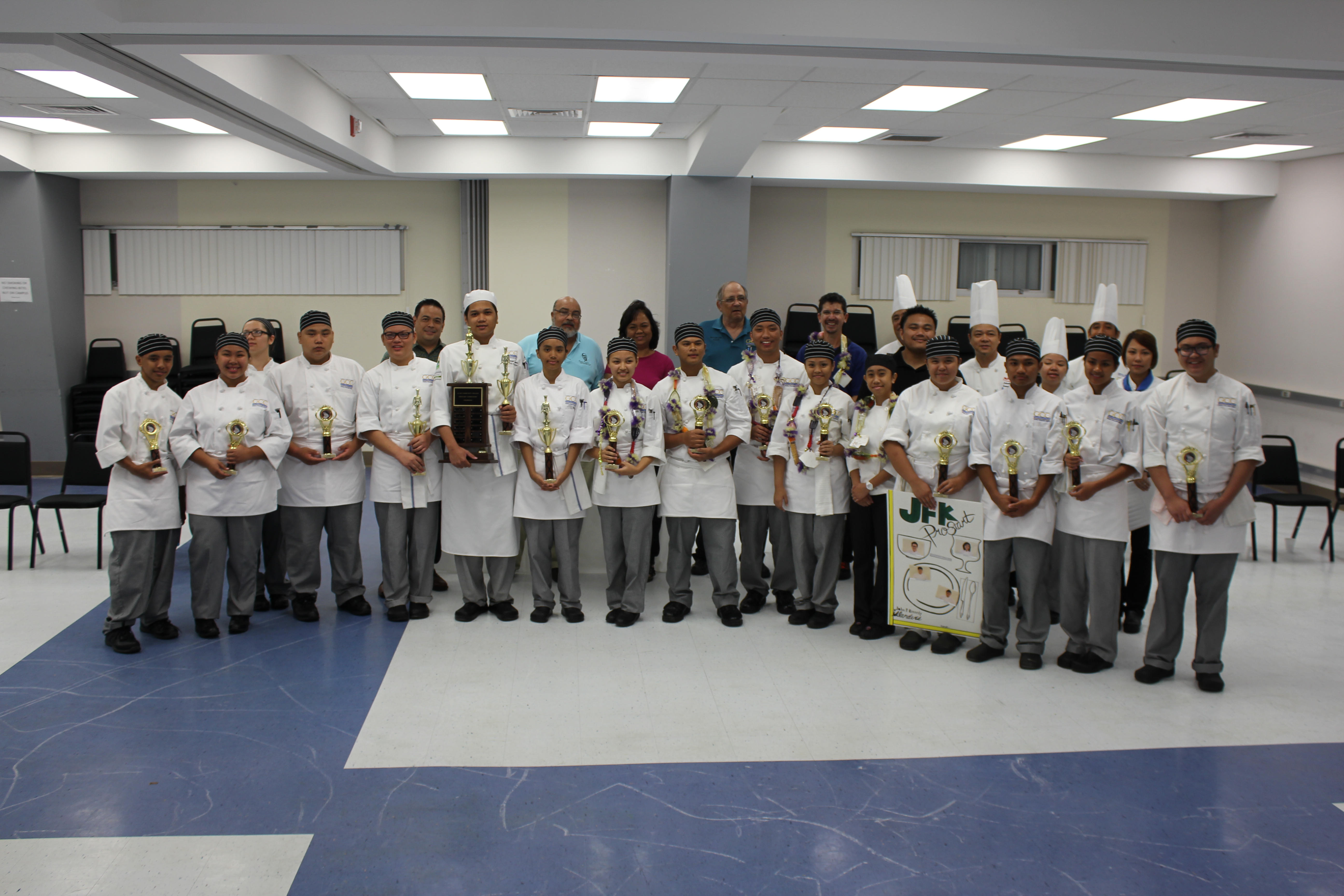 READ the release from GCC below:

For four years in a row now, the ProStart team from Simon Sanchez High School has cooked its way to the top of the local high school culinary competition. Last year, the team won the national championship, and after today’s victory, they are headed to Minneapolis, Minnesota in May to defend their title.

“We’re gonna have to take it to another level,” said team captain and senior Mac Daniel Dimla, the only returning member of last year’s championship team. “We’ll have to develop new techniques and have a new plan of attack.”

“It’s the students,” said Vicky Schrage, Sanchez ProStart instructor. “If they do well, they will gain all the scholarships and opportunities. It is my job to prepare them, but this is about them,” she said.

Right from the start the team is performing at a different level, because Dimla was joined in today’s competition by only two other members, junior Abigail Pineda and sophomore Rhozlyn Javier. They beat second place JFK, third place GW, and fourth place Southern high school ProStart teams, who each competed with the traditional four members. Because the fourth member of the Sanchez team had to quit the team before the competition, they made do with just three members.

“Now we have more pressure,” said Dimla, who upon graduation this year will head to the Culinary Institute of America in Napa Valley, California on a partial scholarship that he won as a member of last year’s national championship team. The top ProStart teams at the national competition  take home $1.4 million in scholarship dollars, according to the ProStart web site http://www.nraef.org/ProStart/Invitational.

ProStart is one of the 10 CTE programs GCC offers in Guam’s five public high schools (Okkodo is scheduled to have a kitchen and a ProStart program next school year).

Sanchez will head to Minneapolis May 3-5 to defend their national title at the 13th Annual National ProStart Invitational.

Before the winner was announced, Chef Sang told the competitors, “You are all winners. Stay true to your passion, and cook from your heart.”