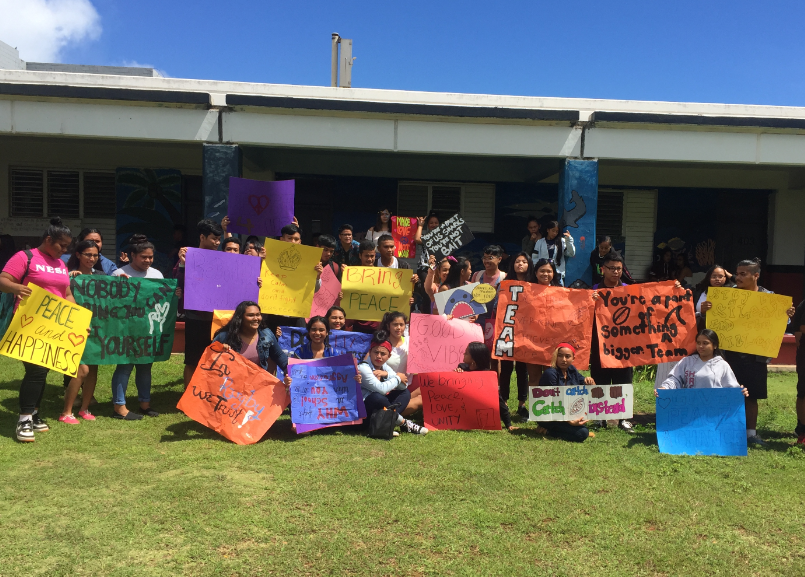 With fights nearly every week, the upperclassmen of Simon Sanchez High School challenged the aggressive student behavior with a peaceful rally and an invitation to join student organizations instead.

Guam – It’s only October and yet, nearly a dozen fights have already occurred at Simon Sanchez High School.

Because of this, the high school students took it upon themselves to share a unified stance against violence with a peaceful rally held on campus grounds this afternoon.

According to Shannon Siguenza, a teacher at Simon Sanchez High School, the outbreak of fights at the home of the sharks has been so alarming that administrators canceled two major fundraising events simply because they were concerned for the students’ safety.

“Today, we were supposed to have the kickoff for the haunted house –it was supposed to be the senior classes’s largest fundraiser, but it was canceled in light of student safety because of the fights that we’ve been getting,” explained Siguenza.

She added that there have been fights all throughout the course of the week that it is becoming a major concern for the students’ well-being.

“What’s upsetting is the students who are most affected by this are the ones who don’t fight in school,” Siguenza said.

A user-submitted video surfaced last week of just one of the multiple fights that took place on campus.The video shows multiple students kicking, punching, and throwing each other on the ground.

Siguenza says the recent cancellation of the events has spurred the upperclassmen to take a stand against the aggressive behavior as well as use this opportunity to show other students that there are positive outlets for them to expel any pent up frustration.

“These student organizations wanted to get together and create a unified message, a message of solidarity to let students know that we don’t want fights in our schools and also to send a larger message to everybody else that Sanchez is not full of a whole bunch of kids who get into fights or that want to get into fights and be aggressive,” she said.

Some of the rally signs challenge students to join the rugby team if they’re feeling aggressive whereas others encourage students to channel their energy into soccer, etc.

You can learn more about the various clubs or student organizations online via the school’s website at www.simonsanchez.org.