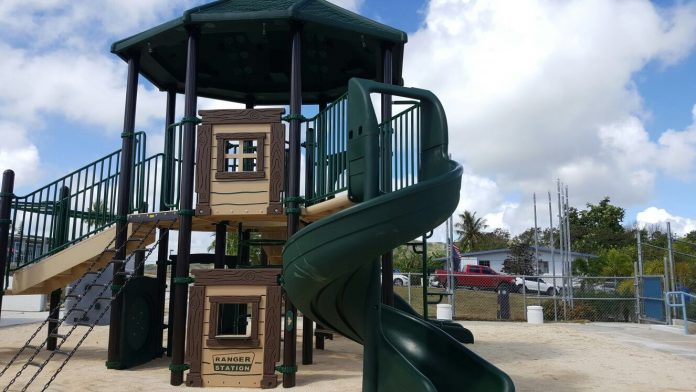 Mayor Robert Hoffman said their previous playground was over 35 years old and in desperate need of repair.

Guam – The village of Sinajana welcomed the opening of their brand new imagination park and playground –a fixture that has been absent in the community for several years.

Mayor Robert Hoffman said their previous playground was over 35 years old and in desperate need of repair. The tattered park was constructed using old sewage pipes and posed a great hazard to the community until it was eventually torn down.

“Today, we gather to officially open Sinajana’s Imagination Park and Playground. After years without a safe place to learn and have fun, this is a significant milestone for us and the children of this village,” shared the mayor.

The mayor added that many of the mayoral budgets for the last decade have not been sufficient to build playgrounds, which is why the village of Sinajana has had to rely on public-private partnerships for projects that benefit the entire community,

The local telecommunications company IT&E and IP&E contributed together $30,000 along with the department for Youth Affairs which contributed $35,000 to the new installation.

Today, marked the grand opening of the first phase for construction. The last two phases will showcase a sun shade over the entire installation and a mural for the children.