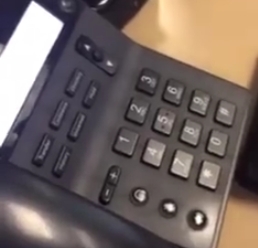 Guam continues to be a target for bomb threats. A total of six bomb threats were reported today and we even obtained a video of a recorded automated message threatening to bomb every Guam high school and middle school.

Guam – The new trend of bomb scares continues this week: multiple bomb threats in a day, with some being written and others being automated calls. The total bomb threats for today? Six.

The most disturbing: GWA dispatch received a phone call at 12:15 pm indicating that bombs will be placed in all Guam high schools and middle schools.
The Twitter account named Evacuation Squad tweeted on Sunday that there would be bomb threats at every Guam school. GWA Spokeswoman Heidi Ballendorf confirmed that GWA dispatch received the phone call.
Earlier this morning at around 10:47 am, there was a report of a bomb threat at Simon Sanchez High School. The school was sheltered in place and the perimeter was secured.
Then five minutes later, at about 10:55 am, three more bomb threats were reported at Southern High School, UPI Elementary School and the ITC building.
According to Offices of Homeland Security and Civil Defense Spokesperson Jenna Gaminde, they discovered a written bomb threat found on the wall at the high school. Gaminde says the ITC building was also evacuated due to a reported bomb threat found in a written note inside one of the restrooms.
After the all clear was given to the three schools and the ITC, at 12:33 pm, the Homeland Security itself received an automated bomb threat call directly to the office. The building, surrounding area and vehicles were swept. The all clear was given at 12:48 pm.
That makes four of the bomb threats called in and the other two written.