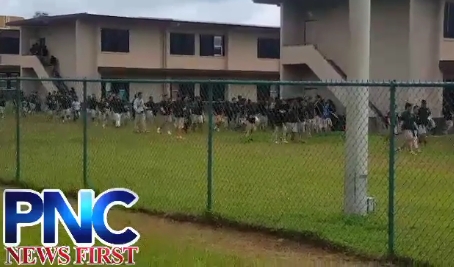 This brings the total number of bomb threats at local schools this month at 44.

It started with JFK High School. At about 8 this morning, Guam Police Department Acting Spokesman Officer Paul Tapo says JFK High School received a bomb threat, which was determined as Low Risk, so students were just sheltered in place. Tiyan High School also received a threat and was determined by school officials to be High Risk, prompting a full evacuation of the students and staff. The all clear was given about an hour after law enforcement officials conducted a sweep of the campus. Then about an hour later, officers responded to more bomb threats at the following schools: George Washington High, FBLG Middle, Inarajan Middle and Marcial Sablan Elementary. Tapao says all the threats were deemed Low Risk and students were sheltered in place until the all clear was given by school administrators.

This brings the total number of bomb threats at local schools this month at 44. GPD is reminding the community that any information about the recent bomb threats can be provided to Guam CrimeStoppers at 477-HELP (4357). If you call and the information you provide leads to an arrest, you could get a cash reward up to $1,000.