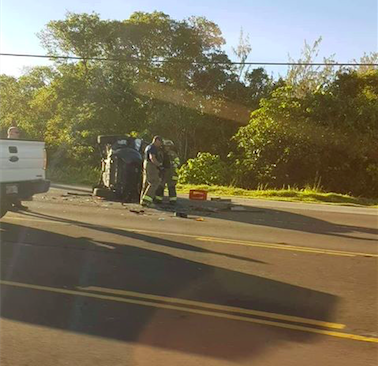 Guam – Dozing at the wheel proved disastrous for one dutiful dad.

An overturned vehicle in Yigo was reported by the Guam Police Department at 7:41 this morning. GPD spokesperson Sgt. Paul Tapau said that a car on Juan Jacinto Road in Yigo  caused the closure of both north and southbound lanes in that area.

On Newstalk K57’s Mornings with Patti, Yigo mayor Rudy Matanane says the driver fell asleep at the wheel after dropping his son to school. When the dozing parent woke up, he swerved onto the opposing lane to avoid hitting a telephone pole, but in doing so, hit a pickup truck and overturned his own car.

According to Matanane, both drivers are okay, but the passenger in the pickup that was hit was taken to GRMC.

As of 9:19 AM, Sgt. Tapau announced the roads were re-opened.