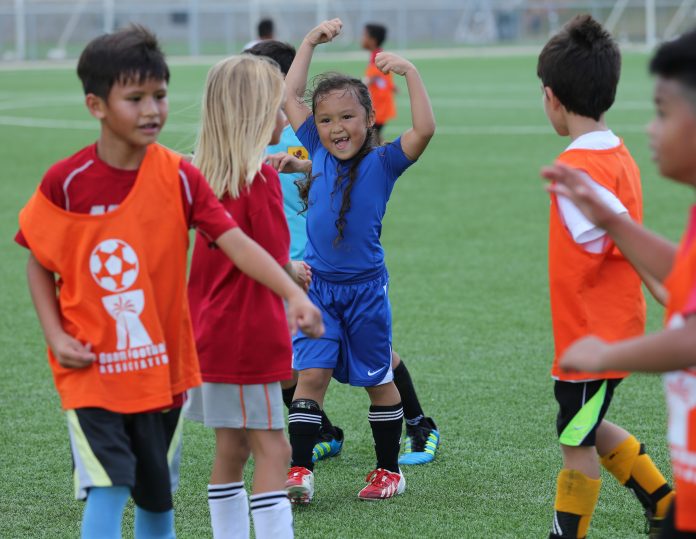 Harmon, Guam – Guam Football Association’s Soccer in the Sun summer camp is back on for another week beginning Monday and slots still are available for the weeklong seasonal program.

All youth, between the ages of 6 and 14, are invited to register for the summer camp, organized and coordinated by certified soccer coaches. Activities during the camp range from games on the turf, futsal courts and beach soccer court to age-appropriate technical training offered by coaches who also work with the GFA National Academy and GFA’s national program.

“I registered my daughter in the camp mainly to keep her active during the summer,” said Tyson Cramer, father of camp participant Luella. “She’s already in the National Academy, but the camp is also something for her to do in the meantime while school’s out. The coaches get the kids in the morning and they participate in organized activities. On some days, they get to play in the sand, which I think is really cool.

[Photo: Luella Cramer, center, in blue, reacts after scoring a goal during an open scrimmage at a previous Guam Football Association’s Soccer in the Sun summer camp at the GFA National Training Center. Registration for the next camp, scheduled for July 22 to 26, currently are being accepted at the GFA Main Office.]

“GFA is doing lots of good things for kids, and I wanted to support the organization as much as possible,” Cramer added.

Registration forms are accepted at the GFA Main Office Monday to Friday between 10 a.m. and 6 p.m. Parents also may register their children for the camp Monday morning by 8:45 a.m. The cost to join the camp is $75 and includes a camp T-shirt, a certificate of participation, and a gift. Check-in time is 8:45 a.m. each day and pick up time is 11:15 a.m. Prior soccer-playing experience is not necessary to participate in the camp.

Upcoming activities for youth and youth coaches include the upcoming 2013 All-Girls League for teams in the U8 to U17 divisions beginning August 17 and the FIFA Grassroots Coaching Course and Youth Festival from August 21-25. Additionally, the Docomo Pacific Robbie Webber Youth Soccer League fall season will begin in mid September.

For more information about the Soccer in the Sun summer camp, the All-Girls League, FIFA Grassroots Coaching Course and Youth Festival or the youth league, call the GFA Main Office at 637-4321.