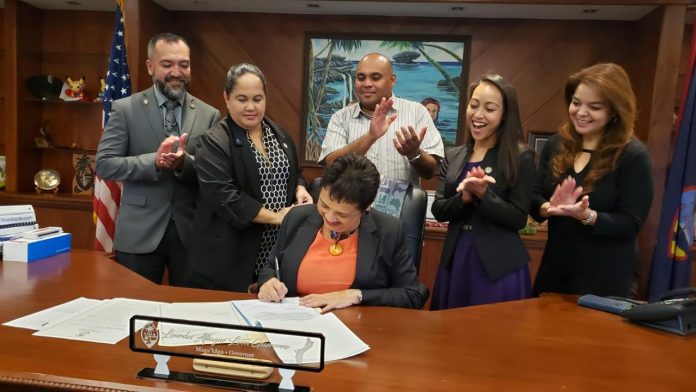 Just last week, interest groups from both sides of the pot debate presented their case to Governor Lou Leon Guerrero. Today, the smoke has cleared on Bill 32-35 as the legislation officially becomes law.

Now Public Law 35-5, the measure legalizes cannabis for adult use, authorizes the island to build a regulated cannabis industry, and allows for home cultivation for personal use.

When asked why she signed the controversial measure, Leon Guerrero said, “At the end of the day, I have to answer this one question – what would a responsible community government leader do to protect the interest and welfare of the community?”

“We must regulate this illicit drug that is the most widely used drug in our society. We have to take it and control it; monitor its use and its effects; benefit from its medicinal efforts; allow our people to live in a safer environment,” she added.

Based on observation, the governor said the community generally agrees on marijuana’s positive impacts when used medicinally, and when used by those who are in pain and suffering.

The governor also spoke about taking control of the industry.

“Keeping it illegal, in my mind, rejects the notion that it exists and that the underground market will continue to prey on us. We have to be ahead of this and we have to control it,” she said, adding, “Nothing changes in the protection of our children, as we remain responsible parents and responsible adults.”

The main concern of the opposition is the protection of children. We asked the governor her opinion on who holds the primary responsibility with respect to their safety and well-being.

“Parents can never abandon their responsibility in protecting children and the safety of our children. Nothing in this bill, now law, changes that,” she said.

Regarding responsibility, a point of concern from critics is the fact that P.L Law 32-35 is in direct conflict with federal law.

“My strongest argument would be that we have local laws and that the federal government now needs to respect local law,” she said.

The governor is also tracking federal government information since a number of laws have already been introduced to legalize cannabis.

What’s the next step?

Ridgell pointed out that there is still a lot of work ahead. The governor must impanel a cannabis control board to create industry rules and regulations/

The rules must include provisions on the possession, consumption, sale and distribution of cannabis. Once drafted, the proposed rules and regulations will be submitted to the Guam Legislature, where it has to go through the Administrative Adjudication Process. The Legislature, after an additional public hearing, may accept, amend, or reject the draft rules and regulations after 90 days.

“A lot of research went into this looking at the jurisdictions that have done the same thing so that I could know exactly what it would mean for the island. And then, from that, it came down to discussing it with my colleagues in the legislature on the session floor and that had many challenges as well. But ultimately we prevailed and we were able to get this legislation here to the governor’s desk for her signature and out to the people.” Ridgell said.

Leon Guerrero also issued Executive Order 2019-11, requiring Government of Guam employees to abide by Drug-Free Workplace policies which continues to prohibit the use of cannabis.

Under the E.O, government employees, while acting in their official capacities, may not possess, consume or otherwise be under the influence of any derivation of cannabis.

The governor also underscores the restrictions in the law, particularly as it applies to our youth. Anyone under the age of 21 found to be in violation of the law or anyone caught providing access of cannabis to underage individuals will be penalized.