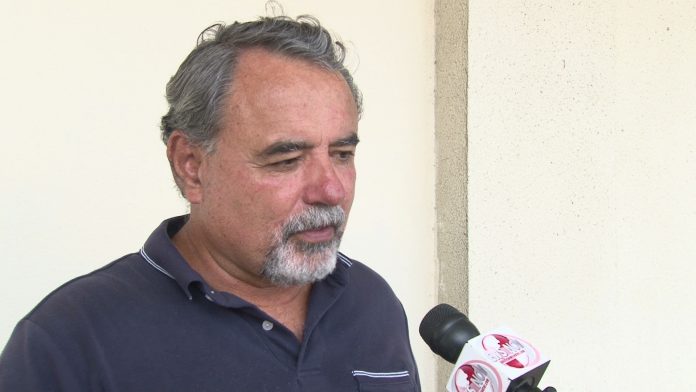 Catholic insider Tim Rohr says he was called to a meeting back in 2010 in which he was asked to read a statement that would discredit individuals who were trying to uncover sexual abuse within the Church.

Guam – The accusations continue for the Archdiocese of Agana. They are now being accused of covering up sexual abuse at the church and trying to discredit those who attempted to uncover it.

The allegations resurfaced today as a result of a press release issued by SNAP or the Survivors Network of those Abused by Priests. In it, SNAP Director David Clohessy brings to light a meeting that took place back in 2010 in which Catholic insider Tim Rohr was allegedly asked to cover up sexual abuse allegations. We spoke with Rohr about this meeting.

“They called me. They gave me the statement to read. I just simply asked, ‘Well why are we doing this? What do we have to hide? Why don’t we just call their bluff and just say come in look we don’t have anything to hide?’ So it was at that point that I learned that there was something to hide because everybody stopped and kinda stared at each other at the meeting,” Rohr explains.

At the time, Rohr says he was unaware that there were allegations of sexual abuse within the Church. He says the members of the Church leadership had called upon him because at the time he was actively involved in defending the Archdiocese. The Archdiocese, Rohr says, specifically wanted Rohr to go after SNAP representative Joelle Casteix, who was visiting Guam in April 2010 to encourage victims to come forward; and Vice Speaker BJ Cruz, who back in 2010 was working on legislation to lift a statute of limitations on reporting sexual abuse at the church.

“They were asking me to go out there and try to discredit those guys that were trying to bring this to light,” Rohr says.

Rohr says he refused to participate in this cover up. Since then, several allegations have surfaced against certain priests and even against Archbishop Anthony Apuron himself. Some allegations, Rohr says, were deliberately buried.

We asked Rohr if he believes sexual abuse is still a problem within the Catholic Church today.

“Yes, it’s a huge problem,” he says, “It’s a big problem. Plus there’s a culture of secrecy, fear and somebody like the archbishop has untold financial reserves to go after somebody like you or me or a victim that doesn’t have any money to defend himself.”

Rohr believes instead of holding priests accountable or trying to prevent the sexual abuse, the Archbishop, by failing to act is, in essence, condoning it. Rohr also mentions the recent sexual abuse allegations that were made against the Archbishop. A man by the name of John Toves in November of last year claimed that his cousin had been molested by Archbishop Apuron.

“In fact I’ve said ever since the John Toves allegations that the archbishop has never come forward to say he’s innocent of the charges. He’s threatened to sue for defamation to protect the church,” he points out. “Those words need to happen. ‘I’m innocent, I never hurt anybody.'”

However, while Toves has been the one to make these allegations against the Archbishop, his cousin–the alleged victim–has never come forward to corroborate the allegations.

You can read SNAP’s full statement below:

Statement by David Clohessy of St. Louis, Director of SNAP, the Survivors Network of those Abused by Priests

A once devout Guam Catholic insider says that an archbishop urged him to try to discredit an abuse victim. The revelation echoes similar and fresh controversies in New York and Chile in which bishops also “trash” abuse victims.

In a new post, prominent Guam blogger Tim Rohr reports that in 2010, he “was called to the chancery by (Archbishop Anthony Apuron’s) legal counsel,” met with “several important people,” and “was given a letter by the legal counsel and asked to take it to the media.” It was “intended to discredit (SNAP leader Joelle) Casteix and get her to go away.”

He refused and reportedly asked the group “What do we have to hide” about predator priests? Later, Rorh began siding with Casteix, other victims and concerned Catholics. He has since challenged and criticized the archbishop and his staff about clergy sex crimes and cover ups on the island.

Casteix, a volunteer and a mother, is the long-time western regional director of SNAP.

This is the third time in a week a Catholic prelate attacked or allegedly attacked abuse victims.

—In New York, in a recently-disclosed deposition, Syracuse Bishop Robert Cunningham said that a child sex abuse victim is “culpable.”

—In Chile, recently-disclosed emails show that one of Pope Francis’ top advisors “conspired to block a survivor from joining the Pope’s sex abuse advisory board, accusing him of lies,” according to the Christian Today. Cardinal Ricardo Ezzati and his predecessor Cardinal Francisco Javier Errázuriz were both concerned that more details of abuse and cover up might emerge if victim Juan Carlos Cruz, who was assaulted by Fr. Fernando Karadima, were named to the papal panel.

We hope these revelation will prod others who saw, suspected or suffered sexual violence by church staff, in Guam and elsewhere, to come forward, get help, expose wrongdoers, and protect kids. Specifically, we hope they’ll call police and prosecutors and confide in sources that are independent, not church officials.

(SNAP, the Survivors Network of those Abused by Priests, is the world’s oldest and largest support group for clergy abuse victims. SNAP was founded in 1988 and has more than 20,000 members. Despite the word “priest” in our title, we have members who were molested by religious figures of all denominations, including nuns, rabbis, bishops, and Protestant ministers. Our website is SNAPnetwork.org)