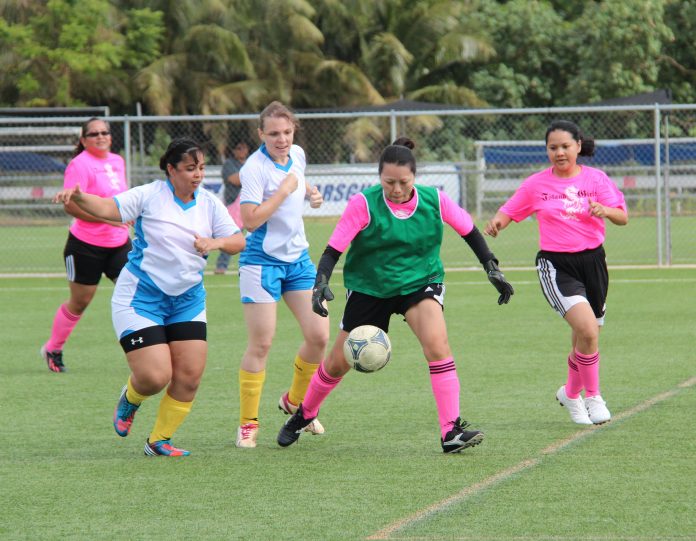 Guam – For Jadyn Palomares and younger brother Jason, spending their Sunday afternoons watching their mother play in the Guam Football Association Soccer Moms League is a welcome addition to their weekend.

“I like watching my mom play because she’s such a great goalie,” said nine-year-old Jadyn Palomares, “She catches all the balls,” chimed in Jason Palomares, nodding his head in agreement.

Annie Palomares and her Island Girls teammates recently played a match against the Dededo Divas, along with eight other teams playing their respective matches, in Week 4 action at the GFA National Training Center.

[The Island Girls goalkeeper Annie Palomares, in green vest, reaches to grab the ball near the goal in a Week 4 match against the Dededo Divas of the Guam Football Association Soccer Moms League at the GFA National Training Center].

“I prefer playing as a defender, helping my team prevent goals,” said Palomares, who is playing in her second season. “As the goalie though, there’s just so much more pressure and I feel so guilty if I let a shot in.

“I’ll ask my kids for advice, things like what the proper form is for a throw-in, or how to kick the ball so it goes up high and far. They teach me some tricks that I’ll try out when I can,” added Palomares, whose children Jadyn and Jason have been part of GFA’s National Academy since the program started in 2012. The siblings also play for the ASC Trust Islanders in the Triple J Auto Group Robbie Webber Youth Soccer League.

On the adjacent pitch, referee Jared Pangindian was officiating a match between Crush Hers and the Lady Bombers. 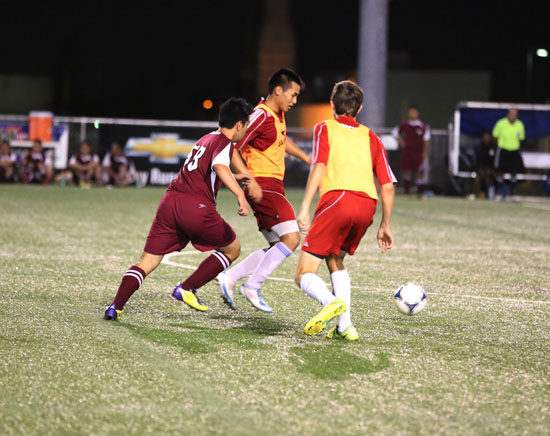 [The Queen Cobras’ Theresa Maestrecampo fights for possession of the ball during her team’s match against Momsters High in a Week 4 match of the Guam Football Association Soccer Moms League at the GFA National Training Center.]

“It’s fun to officiate in the Soccer Moms League – they all just want to have a good experience,” said Pangindian, who has officiated in a variety of leagues, including adult leagues, interscholastic leagues and the youth league. “Since many of the players in the league are new to the sport, I use my role as a referee to also help teach them the Laws of the Game. Sometimes, they’ll ask questions during the match and I try to help them.”
The 10 teams will return to the pitch Sunday with new kick-off times. Crush Hers will play the Island Girls at 5 p.m., followed by the Dededo Divas and the Queen Cobras at 6 p.m. on Field A. Also playing at 6 p.m. are the Lady Bombers and the Supersonics on Field B.

The last round of matches will kick off at 7:10 p.m. with Femme Fatale taking on Pika Moms and Momsters High playing against the Heat Wave. 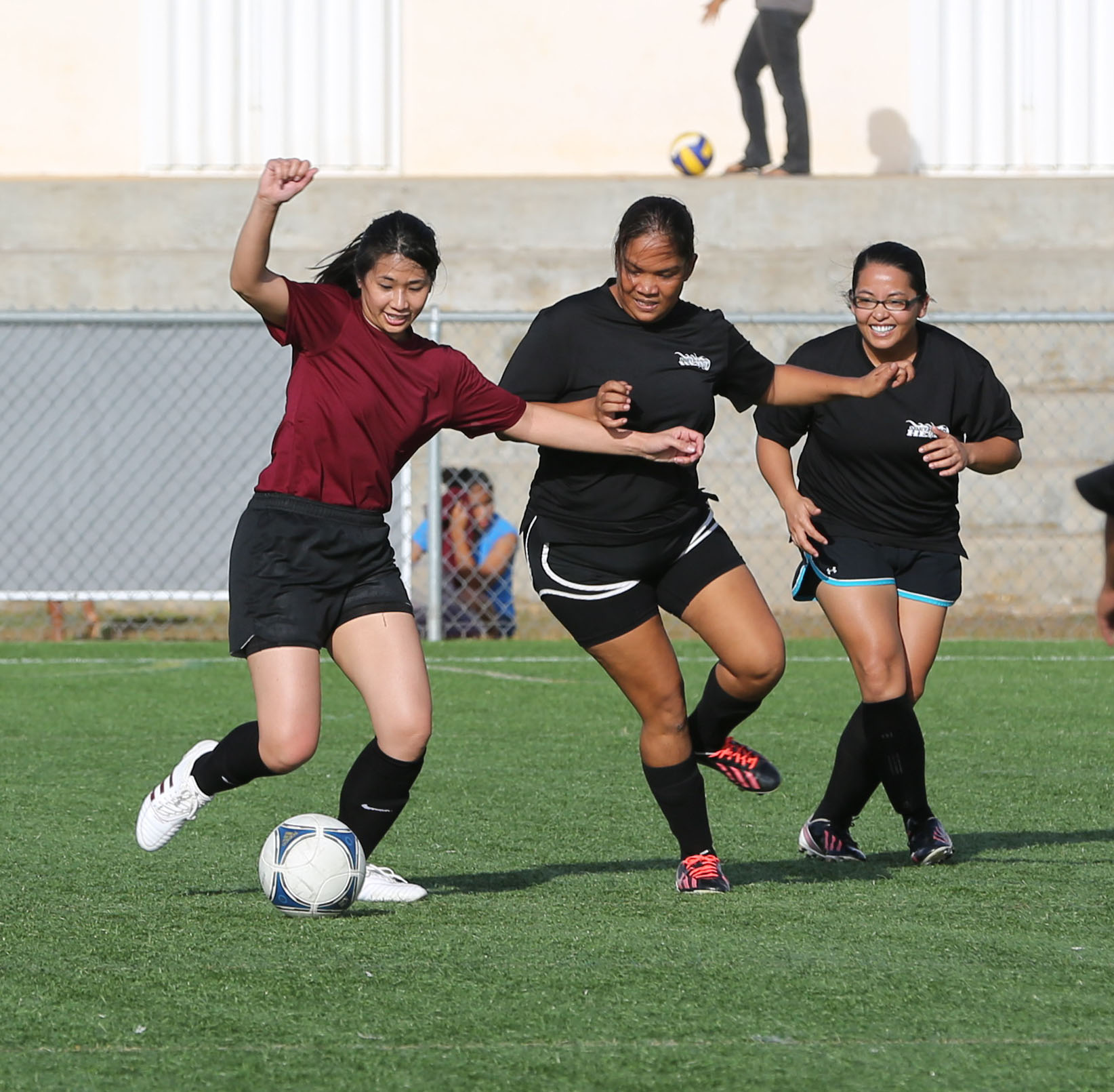 [The Pika Moms’ Bernadette Santos tries to stay in control of the ball as she keeps back two Heat Wave defenders in a Week 4 match of the Guam Football Association Soccer Moms League at the GFA National Training Center.]

A full schedule is available online at http://www.guamfa.com/all-leagues-womens-7-a-side-results

The Mini Masakåda, Guam’s under-14 girls’ national team, will be selling snacks and drinks during league matches as a fundraiser to help offset travel and team expenses for an international tournament later this month.