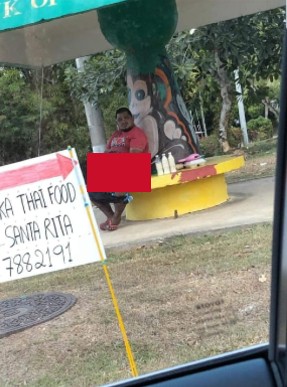 Guam – A picture circulating social media has sparked some outrage in the community as it depicts a man half-dressed lounging at a bus stop.

In the picture, the man appears to be loitering at a bus stop in Santa Rita.

The unidentified man’s shorts are dropped below his knees with only a cloth covering his private area as he sits at the bus stop.

The picture has raised concern in the community. Guam Police Department spokesman Sgt. Paul Tapao said tGPD is working with DISID and the Guam Behavior Health and Wellness Center to address this matter.

Meanwhile according to Santa Rita Mayor Dale Alvarez, the individual was removed from the bus stop before 10:00 a.m., Friday.