It’s been over 8 years since the receivership started.

Guam – Within days of listening to arguments over the end date of the solid waste receivership, Chief District Court Judge Frances Tydingco-Gatewood released an order on the matter.

Judge Gatewood has ordered the extension of the federal receivership to June 30, 2018. The receivership was anticipated to end by December 31, 2017.

Judge Gatewood did not yield to any compromise requests, such as GovGuam’s desire to end the receivership except for the continued oversight of the post closure care for Ordot Dump.

“Receiver shall continue to exercise full power and authority over all GSWA functions, duties and responsibilities,” concluded Judge Gatewood.

Judge Gatewood admonished GovGuam for being uncooperative in the entire process.

“The Receiver has always cooperated in this process, and there is no reason why the relationship between the Receiver and the Board continues to be strained and antagonistic. The Board needs to begin treating the Receiver as an ally and not an adversary in this transition process,” lamented Gatewood.

You can read the order here. 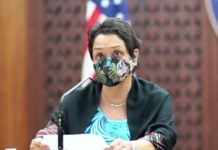