Some of the island’s mayors are proposing a fee for verifications of residency. But the president of the Mayors Council of Guam is opposed to the idea.

Recently, the idea of charging for verifications of residency was floated among the Mayors’ Council.

The intent is to recoup the cost of printing materials as well as provide a supplementary source of revenue.

One of the opponents of the idea is Piti Mayor and MCOG president Jesse Alig.

“It was being discussed that perhaps a fee could be assessed for it just like police clearances and traffic clearances. And I’m just not a proponent of adding more fees for constituents to pay, and I don’t believe it’s necessary. What I think is important now, especially during COVID and beyond, is everything should perhaps be more digital,” Alig said.

He said that going digital would be quicker, cheaper, and would reduce face-to-face contact.

Alig said one of the justifications for the idea is to make up for budget shortfalls that have occurred because of the pandemic.

However, he said that whether or not to phase it out after the pandemic is over has yet to enter the discussion.

He said the discussions around the idea have been very preliminary and details such as how much a verification would cost have not been addressed.

Alig said that it’s part of the larger discussion around the User’s Fee Schedule that the Mayors’ Council is trying to push through the Legislature.

The Users Fee schedule will have to undergo the Triple A process, which includes a public comment period.

Alig said that considering how important the document is for people seeking services from agencies such as Public Health, Rev and Tax, and Social Security, he sees the fee as an unnecessary hindrance for Guam’s residents.

“When you think about a form like that, I mean how do you charge the ten or twenty dollars that GPD or the courts charge…and some people need more than one copy, so again, that was a discussion. Nothing was set in stone, it definitely would have to go through a process … but again, it’s just something that I don’t think makes sense at this point,” Alig said. 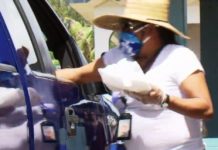