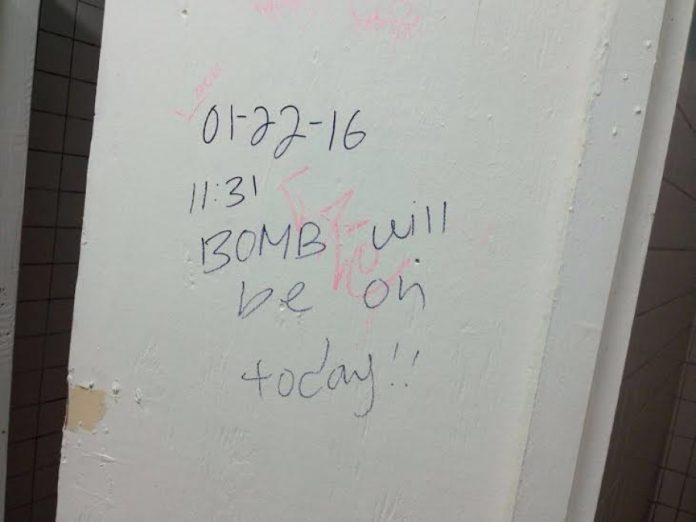 A total of ten written bombs threats were reported at various schools around the island in the past couple of weeks.

Guam – The Guam Police Department has taken minors esponsible for some of the bogus bomb threats in the past week into custody.

A female minor was taken into custody for her involvement in a bomb threat that occurred at Agueda Johnston Middle School on Thursday which caused the evacuation of the entire campus. Tapao explains that school officials conducted an investigation which yielded the identity of the female minor.  Juvenile offices were then contacted in which the female minor was confined at the Department of Youth Affairs.

Four female minors were also taken into custody for their involvement in todays bomb threat that occurred at Inarajan Middle School Friday afternoon, also causing an evacuation of the entire campus. During the course of the evacuation, school officials were informed of the identity of the students responsible for the act. All four were later taken into custody by GPD’s Juvenile Investigators and were later confined at the Department of Youth Affairs.

On a separate incident, a male minor from Simon Sanchez High School was taken into custody for verbally communicating, “That he was going to bomb Simon Sanchez High School.” In response to the threat that was made by the student, he was later taken into custody by GPD’s Juvenile Investigators and later confined at the Department of Youth Affairs. This student was not identified as the student responsible for the two bomb threats that were made to the school.

The Guam Police Department continues it’s investigation in reference to the threats to Simon Sanchez High School and Southern High as investigators continue to follow up on leads and tips relative to the two incidents.  The community is also encouraged to help by providing any information they might have to the Guam Crime Stoppers by calling 477-HELP, submit a text at 486-HELP or submit a tip online at guam.crimestoppersweb.com.  All calls will remain completely confidential.

Over the last couple of weeks, there have been ten bomb scares all together, all resulting in negative findings. What’s more, it seems to be a trend because all the bomb threats were written, either in a form of note or graffiti on the wall.