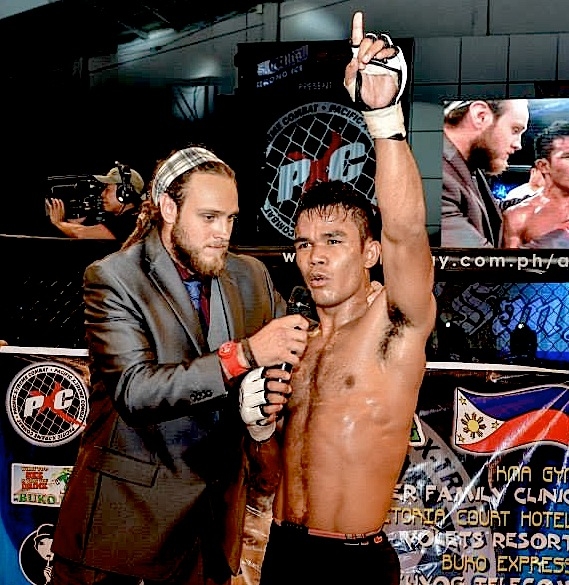 In Philippine MMA, just the name Rolando Dy may not yet ring a bell that much, although he has already compiled an impressive 5-win-2-loss professional record, and is one of PXC’s rising stars and top fighters from the Philippines today.

PRESS RELEASE – In Philippine MMA, just the name Rolando Dy may not yet ring a bell that much, although he has already compiled an impressive 5-win-2-loss professional record, and is one of PXC’s rising stars and top fighters from the Philippines today. In fact, Dy is on a three-fight winning streak, defeating Arex Montalban, Guamanian talent Kyle “Boom” Reyes, and Korea’s Han Bin Park. He will face his biggest challenge come October 24th when he fights for the Bantamweight Championship in PXC-45 in Guam versus top-contender, Kyle Aguon.

Dig a little deeper into his personal background, though, and “The Incredible,” as Dy is known in fighting circles, will certainly excite MMA fans even more. His biological father just happens to be a boxing legend in the Philippines, ranked the 9th best Super-Featherweight Champion in history by the World Boxing Council, Rolando Navarette.

Before Manny Pacquiao, there was Rolando Navarette, the Philippines’ celebrated boxer in the 80′s whose fists of stone earned him 20 knockouts in his first 52 professional bouts. Dubbed as “The Bad Boy from Dadiangas,” Navarette even went head-to-head with legendary champion Alexis Arguello (eventually losing via TKO). His star shone the brightest in 1981 when he won the WBC superfeatherweight title by knocking out popular Cornelius Boza Edwards in the fifth round. Navarette successfully defended his belt against a gritty challenger, Choi Chung-Il of Korea. He lost in his second defense to Rafael “Bazooka” Limon via a come-from-behind TKO in the 12thround.

Navarette’s legacy as a boxer is already cemented, and by no coincidence, is being continued by his son Rolando Gabriel Dy, who has chosen to use his mother’s maiden name to honor her effort and hardship of raising him and a sibling all by herself.

Even without his father’s guidance and encouragement, the younger Rolando has always known that he wanted to fight. In a recent interview with Nissi Icasiano for social news network Rappler.com, he said, “Even if I was not raised on my father’s side, it was my dream to be a boxer ever since. I knew I had the talent, but I just haven’t developed it back then.”

Dy’s path to boxing took a detour when a friend introduced him to MMA, and he was hooked ever since. Born in 1991 in Paranaque City and raised in Davao del Sur, he joined a local combat group in Davao City where he learned Brazilian jiu-jitsu, eventually adding Muay Thai and wrestling to his arsenal. He was 19 when he started fighting in amateur MMA competitions, and made his professional MMA debut, winning via a second-round TKO in October 2011. PXC picked him up a month later, and has started carving a name for himself ever since.

PXC’s CEO, EJ Calvo, has this to say on why Dy has earned a title shot: “We immediately liked the way Rolando approached his fights. He impressed us more each time, and eventually earned his shot to fight at the top-tier of our loaded Bantamweight Division that is well-known to produce UFC level fighters.”

Dy acknowledges the role PXC plays in the development of his career, which he believes, will peak when he gets to fulfill his dream of fighting in the UFC. “PXC is a great promotion,” he said during the same Rappler.com interview. “They take good care of their fighters. PXC serves as the bridge to UFC, so it’s an advantage for someone to fight for PXC if he aspires to be included in the UFC roster someday.”

With a win come October 24 in PXC 45, Dy will become the newest Filipino champion of the premiere MMA promotion in the Asia-Pacific region. This is the reason he works hard for the sport, despite being also a fourth-year Legal Studies student at the Lyceum of the Philippines University. Dy doesn’t want to be known as simply an average fighter, but one of the best to represent the Philippines in the sport.