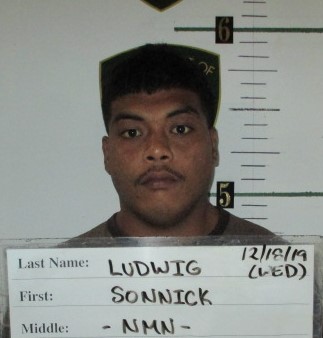 A 22-year-old man caught on videotape threatening an employee at the Sinajana Pay-Less with a carving knife has been arrested.

Sonnick Ludwig is being charged with assault and possession of a schedule 2 controlled substance.

According to the magistrate complaint, Ludwig approached two store employees in the parking lot as they were collecting shopping carts and asked one of them if he wanted to fight.

The two employees “retreated inside the store” but Ludwig followed them inside where the store’s security camera shows him hitting a grocery cart with the knife.

Ludwig “screamed that he would kill everyone,” states the complaint. He eventually left the store with a woman “who appeared to know” him.

Two days later, on Wednesday, Ludwig was seen walking through the store parking lot and one employee who recognized him called police and then followed him to the nearby Sinajana GHURA housing area.

The complaint states that when police arrived and approached Ludwig they saw him take something out of his pocket and throw it to the ground.  Officers recovered a lighter and a glass pipe with meth residue on it.

Ludwig told the officers that “he was the individual at the Pay-Less with the knife.”

The complaint states that Ludwig said he was “drunk that day and may have threatened to kill everyone, but did not mean it.”

Ludwig also admitted that “the pipe he threw to the ground was his ‘ice’ pipe that he used to smoke meth.”