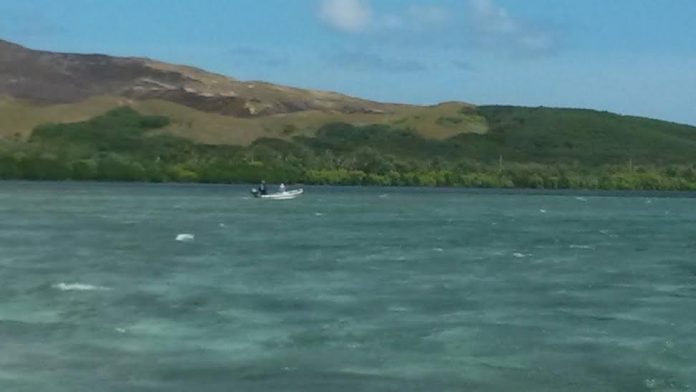 Conservation Officers Say They Are Understaffed

Guam – Fishermen in the southern village of Malesso are reporting that illegal fishing has been occurring in the Achang preserve. A picture was posted on Facebook showing a boat allegedly in the preserve. The Facebook post also alleges that they were Chuukese fisherman however Dept. of Agriculture conservation officer Sgt. Mark Aguon says that the picture appears to show the boat trolling outside of the reef which he says is allowed in the preserve.

A picture has been shared on Facebook alleging illegal fishing within the Achang preserve in Malesso. However, Department of Agriculture conservation officer Sgt. Mike Aguon says he reviewed the picture and doesn’t believe it’s proof that they were fishing illegally. “We can see the vessel is actually moving which appears that either they’re trolling or they’re just going from one place to another but we’re not clear as to what they’re doing in that photo it doesn’t appear to be fishing,” said Sgt. Aguon adding, “The calls are coming in more frequent but some of them are considered complaints but then we come to find that they are mistaken what they see for example distance between the reef and where the actual fishing activities are taking place.”

Sgt Aguon says you can actually go trolling outside of the reef of a preserve. Fisherman in Malesso have alleged that the men are Chuukese who are fishing in the preserve however Sgt. Aguon says the problem isn’t limited to just one ethnicity He says they catch all kinds of different people fishing illegally in Guam’s preserves including locals. “The laws pertain to everyone on Guam not just the Micronesians or Chamorros it’s everyone and we do check them diligently everyone we go to the fish markets we go to the flea markets we go to the shores where they come in we pick up their vessels and we make inspections as best we can with the number of guys we have we’re doing the best we can with the resources we got and we will continue hopefully we’ll get some support,” said Sgt. Aguon.

Sgt Aguon says he has only 8 conservation officers to police both the land and the waters of Guam so they aren’t always able to catch alleged perpetrators. He also says that some of the complaints are stemming from locals who are just upset that others are fishing in Guam waters. “Outer island folks catching fish here on Guam and then selling it back to the locals and that’s really what the big issue is for everyone and we feel for everyone that feels that way but us as law enforcement were just being fair we check everyone,” said Sgt. Aguon.

Sgt. Aguon says they will continue to do their best with the limited staff they have to catch anyone fishing illegally in the preserves