Guam – A focused and poised Paige Surber went through her usual routine setting up the ball for a penalty kick Friday night at the Guam Football Association facility in Harmon.

When she found the perfect position for the ball, she walked back a few steps, looked toward the goal, ran up to the ball and launched a rocket to the back of the net. This time, instead of running back to her Southern High School teammates, she dropped to her knees and slid forward with her arms outstretched in victory knowing full well that her team, the Southern High School Dolphins, had secured the IIAAG Girls High School soccer championship. In seconds, the whole Dolphins team ran toward Surber and piled onto their hero, who also was selected as the championship game’s MVP.

It was another bridesmaid season for the Notre Dame Royals, this time falling to the Dolphins 4-2 in an exhilarating penalty shootout necessary to determine the league’s undisputed champions. The game remained at 2-all through extra time, setting up the penalty shootout.

“I couldn’t ask for a better result,” said Southern’s seventh-year coach Joseph Cruz proudly beaming after the shootout. “Last year we were eighth place, getting knocked out early on. We didn’t even have a chance to play here at GFA last year. Before tonight, the team had only gotten as high as third place during my time as coach.

“The beautiful thing is that everyone on this team will be back next year. We won’t lose any players to graduation,” Cruz added, as he walked back toward his team, who proceeded to douse him with ice-cold water in celebration. 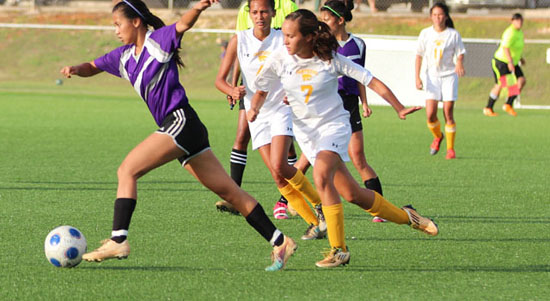 After a short captains meeting with the game’s referees, it was agreed that Southern would kick first in the shootout.

Kiarra Sanchez, who also scored in regulation time for the Dolphins, put her team up 1-0 and immediately after, ND’s Demi-Rae Shimizu leveled the shootout with a successful shot. Zoe Surber followed suit, placing her shot to move the Dolphins up 2-1. ND’s first heartbreak came moments later when Isabella Shimizu’s shot sailed over the crossbar, keeping the tally at 2-1 in favor of Southern.

Next, April Talledo, a last minute goalkeeper for Southern after Lorraina Sanchez was relieved of her goalkeeping duties in the final minute of extra time, kicked up her shot that ricocheted off the crossbar and into the net to give the Dolphins a commanding 3-1 advantage. ND senior Jamie Soriano successfully blasted her shot to the right post and away from an outstretched Talledo to keep her team in contention.

ND caught a break when Southern’s Tanya Flores sent her shot above the crossbar, but in the ensuing kick, the Royals’ Jonimonay Tedpahogo launched her shot over the crossbar as well, setting up the game-winning opportunity for Surber.

Southern blew an early 2-0 lead, as the Royals viciously fought back in the second half of regulation time to knot the game. ND made it a one-goal game in the opening minutes of the second half, capitalizing on a corner kick from Demi-Rae Shimizu. ND coach Noel Casilao credited senior Tiffany Judicpa with the last touch on the ball that traveled just enough to pass the goal line, despite a slew of Southern defenders desperately attempting to keep the ball out of the goal.

Sanchez made key plays at the goal to keep the Dolphins ahead in the game, including stopping a one-on-one shot by Tedpahogo that had Southern fans erupting in cheers. The Royals would delay the Dolphins championship win when Shimizu broke through Southern’s right-side defense and found Joneen Terlaje, who scored the equalizer with less than four minutes left to play in regulation time. Both teams went scoreless in extra time to set up the shootout.