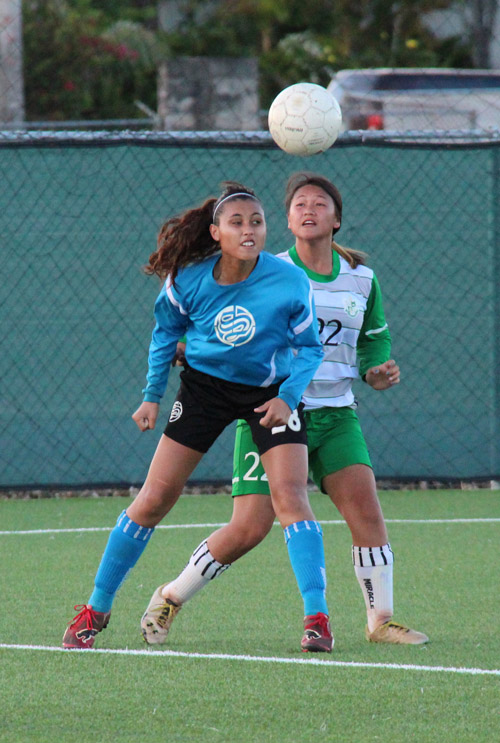 “It was great that I was able to help my team get to the semifinals by scoring goals,” said Tianna Sakaba, who was credited with a hat trick for the Dolphins. “It was really about the team, though because I wouldn’t have been able to get my shots at the goal without them.

“To win in the semifinals and get into the finals, it really will be important for us to work as a team on the field and also to cheer up our teammates if we’re down. It really about having a positive attitude throughout the game,” the Southern High sophomore added.

Sakaba broke the scoring ice with a long-range blast that had enough arch to find the back of the net over JFK’s goalkeeper, Patricia Manlulu. Moments later, Sakaba struck again, this time at close range near the right side of the goal to put her team up 2-0 before the halftime whistle.

[ Southern High School’s Tianna Sakaba passes the ball to a teammate with a header against John F. Kennedy High School’s Colleen Tedtaotao in a quarterfinal game of the IIAAG Girls High School Soccer League playoffs at the Guam Football Association facility in Harmon. Sakaba scored a hat trick in Southern High’s 4-0 win over the Islanders.]

Sakaba completed her hat trick within the opening minutes of the second half, and minutes later, teammate Kiarra Sanchez knocked in a goal from the right side for the final score of the game. Southern High controlled the field during the second half, denying JFK any shots.

The Dolphins will next face the defending champions, the Guam High School Panthers, 1-0 winners over the Simon Sanchez High School Sharks in extra time. Guam High’s Quincy Tougher placed a hard shot on goal that the Sharks’ goalkeeper was unable to control. Tougher’s teammate Jaelyn Freeman got to the goal in time to get the last touch on the play and the goal for her team.

In other quarterfinal games, the Notre Dame High School Royals move into the semifinals past the Harvest Christian Academy Eagles with a convincing 9-2 score. Demi Rae Shimizu led ND’s scorers with five goals. Phoebe Minato and Felicia Alumbaugh scored Harvest’s goals. The Royals will next face the George Washington High School Geckos, who defeated the Academy of Our Lady Guam Cougars, 3-2 on penalty kicks yesterday.

Both semifinals games will be held at the GFA facility in Harmon on May 15 beginning at 4:30 p.m.