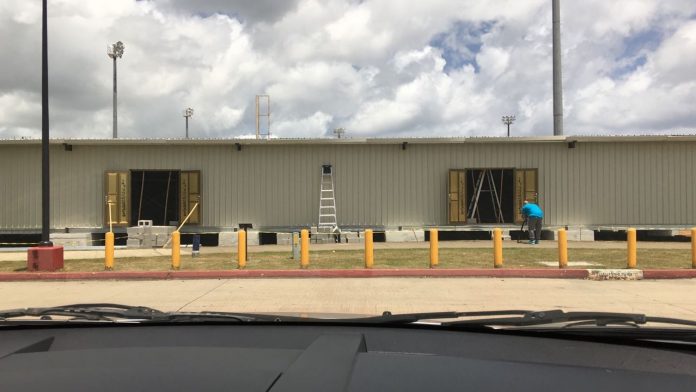 Last week, construction began on what is to be a casino at this year’s Liberation Carnival grounds in Paseo, which sparked an uproar from anti-gambling groups.

Guam – The 73rd Guam Liberation Carnival will be opening soon at the Paseo, and this year’s theme is “Strength in Unity.” But at the moment, there isn’t much unity when it comes to the casino that is currently being built on the carnival grounds.

Atty. Jay Arriola of the anti-gambling organization, Keep Guam Good, was very vocal about his opposition to the construction of the metal structure.

“I question how they’ve obtained a permit for building a permanent structure on Government of Guam property, for government use (that’s what the permit says), and Department of Parks and Rec needs to be inquired upon as to how they were able to build such a structure, and who provided the funding for it; whether there was any bid put out, whether the people were investigated, whether background checks were performed on who’s really building the structure, who’s funding it. It certainly looks a lot like a Saipan structure going up, with the gold doors and the Chinese characters on the front. We have serious concerns that have never been answered by the Mayors Council: who’s the vendor, how much does the Mayors Council or the Guam Liberation Historical Society make every year out of this, and where is all the money going, and most importantly, where are the documents that are supposed to be filed at Rev & Tax?” Arriola said.

The permit was obtained on May 4 for Xiang Wang Construction to erect a “metal building for Liberation Carnival 2017” with a projected cost of $30,000. According to Agana Heights Mayor Paul McDonald, who is also a founding member of the Guam Liberation Historical Society, the construction began about a week ago. Although Atty. Arriola says there has been steady public outcry against casino gambling over the years, Mayor McDonald says otherwise.

“The whole festivity is run by the public, not by the mayors. The historical society is public,” McDonald explained. “We are here to actually use the casino to fund the Liberation. That’s all that we’re asking. That’s why we oppose the bill. But the mayors don’t gamble. All we want to do is not go and beg for funds to fund our liberation festivities.”

McDonald adds that, should casino gambling at the carnival be banned, the Mayor’s Council will not be involved with organizing future Liberation Day carnivals, which the mayor says would be stopping a tradition that was preserved since the war. But anti-gambling activists continue to seek support from the Legislature.

“The appropriate officials need to intervene. Call the Legislature — oversight. Call these people back in. Just a couple of weeks ago, they were before the Legislature whining about how they need this money, and they don’t have any other money, and ‘we don’t even want the responsibility. If you’re going to take away casino gambling, then take away the whole Liberation Fair.’ Maybe they should! People have suggested to go over to GVB, since GVB is supposedly the premier organizer for such activities, send this over to them. If they don’t want it, they shouldn’t be putting up $30,000 buildings,” Arriola argued. “And we all know what they’re trying to do. They’re trying to back-door this in to put a permanent structure down in Hagåtña so they can say, ‘hey, look. We invested all this money in a $30,000 shack down there with gold doors, now we have to have casino gambling every year, year-round.’”

Mayor McDonald says there was never casino gambling year-round, and adds that casinos would not be necessary if there was a better funding source, saying, “We’re just trying to do with what we have, and I’m sure that, going back to the funding, we’re happy to… we don’t have to bid it out, we just have the funding to go and have the festivities once a year. And we’re fine. We don’t need a casino if the money is there.”