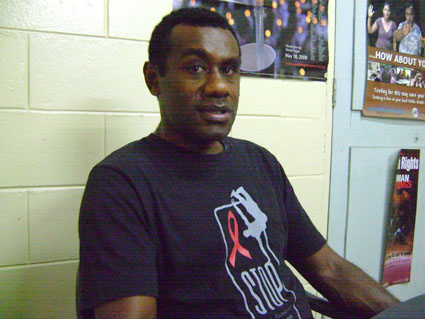 Suva Fiji – In a region where community rejection is common for people who declare their HIV positive status, a group in Fiji is working to advocate for their rights.

The Fiji Network for People Living with HIV (FJN+) is supported by the Pacific Islands HIV and STI Response Fund, established three years ago with funding from donors including AusAID, France and the New Zealand Aid Programme to address the growing rate of sexually transmitted infections and HIV in the Pacific.

Luke Nayasa, 38, is part of the FJN+ team of advocates working with other local and regional organisations to educate the public, both in Fiji and throughout the region, about the virus.

“It’s not easy to come out publicly and say that I’m HIV positive because you stand a chance of being stigmatised, discriminated against and isolated,” Nayasa says.

Ten years after being first diagnosed with HIV, Nayasa has overcome the rejection of his family and friends, is comfortable with his status, and has his own family, who are HIV negative.

Nayasa lost his first son, who was diagnosed with HIV in 2002 after unexplained prolonged illnesses. At this point, Nayasa and his first wife – then pregnant with their second child – discovered their status.

His daughter, now aged nine, was one of the first three babies in Fiji to undergo successful treatment for preventing mother-to-child transmission. His first wife succumbed to HIV related illnesses four years after their diagnosis in 2006.

Nayasa has been on antiretroviral drug therapy, which has helped keep his viral load down. Since remarrying in 2008, he has had another son.

In 2010, Nayasa went public with his status and the fact that his wife, daughter and son were all free of the virus.

Nayasa and his wife offer new hope for sero-discordant couples in Fiji and the Pacific Islands (sero-discordant describes a couple where one person is HIV positive and the other HIV negative).

‘We are a normal family like any other family in Fiji. We have our ups and downs,’ said Nayasa. ‘Having a family is the best treatment because you get to enjoy every little thing in a different way.’

‘My family has taught me valuable life lessons and I use these experiences when I’m on an outreach programme. It helps me tell my audiences about the human side of HIV and AIDS.’

Nayasa is also a Sports Training and Outreach Programme (STOP) HIV champion under the umbrella of the Oceanic National Olympic Committee (ONOC).

He continues his advocacy work, lobbying for better awareness and acceptance on the part of the general public that HIV ‘is not a death sentence’.