Frankfurt, Germany –  Secretariat of the Pacific (SPC) Director-General Dr.  Jimmie Rodgers ended his tour of SPC’s funders based in Europe with a series of high-level meetings in Germany.

Dr Rodgers met with Ms Gudrun Kopp, Parliamentary Secretary, Federal Ministry for Economic Cooperation and Development (BMZ). This was followed by a meeting with the Parliamentary Secretary and five members of parliament who are also members of the Federal Committee on Economic Cooperation and
Development. Ms Kathrin Oellers, Head of South East Asia and the Pacific Division for BMZ, also attended the meeting.

The meetings show Germany’s high level of commitment and interest in SPC’s work for the development of the Pacific region. The focus of the meetings was on key development challenges faced by small developing Pacific Island countries and territories (PICTs). Climate change, an issue of key importance to PICTs, was a major theme of the discussions.

[Dr Rodgers with Ms Kopp Parliamentary Secretary for State and Members of the Bundestag, who are on the Development Committee]

Ms Kopp said ‘in recognising that we are all citizens of one world and acknowledging the important role the SPC has in assisting the Pacific region in development efforts, Germany will remain at SPC’s side in a way that is acceptable to all.’ She further highlighted the importance of close contact
between SPC and German officials with regard to Pacific issues.

Dr Rodgers thanked Germany for its support, including EUR 19.2 million in funding for climate change adaptation work through the partnership between SPC and the German technical cooperation agency Deutsche Gesellschaft für Internationale Zusammenarbeit (GIZ), and additional funding of EUR 6.0 million for a cooperation project that is soon to be finalised.

Discussions focused on Pacific development, and particularly on adaptation to climate change, one of the key challenges faced by the Pacific. These meetings were an opportunity for Dr Rodgers to provide detailed information about the work of SPC and its role as the premier technical and scientific organisation in the Pacific. 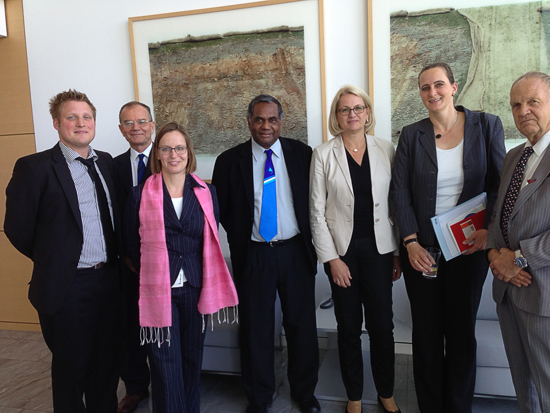 Dr Heimburger stated that SPC is a trusted partner for KfW for which assistance to the Pacific region can be offered and further committed to working with SPC as implementation partner. She said that she looked forward to finalising the documentation for a new EUR 6 million project on Climate Change by the end of 2013.

Mr Contius noted that through the German International Climate Finance Initiative there were real opportunities, recognising the extensive work that SPC undertakes in climate change adaptation for further developing a partnership in progressing a ‘Green Economy’ in the Pacific context.

Dr Rodgers acknowledged the close on-the-ground cooperation between the Secretariat and GIZ which has resulted in outstanding achievements for the region.  Ms Klamert echoed these sentiments, adding that GIZ looked forward to a continued and enhanced partnership with SPC in the implementation of jointly developed projects and programmes to benefit Pacific people.

Furthermore, Ms Klamert assured SPC of GIZ’s support for a strategic holistic approach and advocacy of SPC’s work among European partners.    These meetings resulted in a resolve to seriously pursue an integrated German programme in the Pacific bringing together the various instruments of BMU, GIZ, KfW and BMZ (the Federal Ministry for Economic Cooperation and Development).