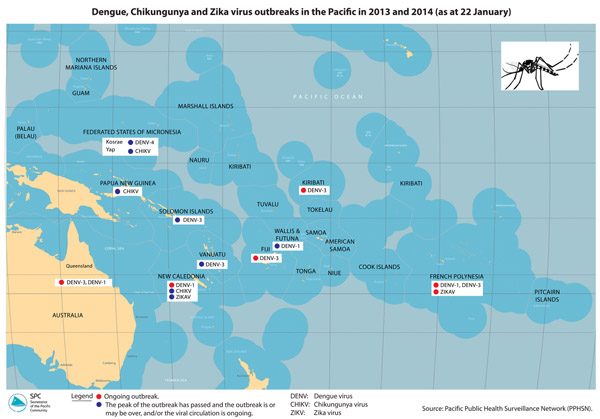 Noumea, New Caledonia – (Thursday, January 23) – The first locally-acquired case of Zika virus infection that was detected in New Caledonia on Friday (17 January 2014) represents a new epidemic threat to the territory and the Pacific region, which is already affected by several epidemics of diseases transmitted by mosquitoes.

‘We are concerned about the increase in the frequency and variety of epidemics of diseases transmitted by mosquitoes in the region over the years. They threaten more and more the health security of the Pacific populations and the world,’ says Dr Yvan Souarès, Deputy Director of the Public Health Division at the Secretariat of the Pacific Community (SPC).

In 2012, the four serotypes of dengue fever virus (DENV-1, DENV-2, DENV-3 and DENV-4) were circulating in the region for the first time in a given calendar year.

Last year (2013) was marked by an unprecedented number and variety of epidemics of diseases transmitted by mosquitoes: eleven dengue epidemics of three different serotypes, three chikungunya epidemics and one Zika virus epidemic were recorded in the Pacific region.

SPC’s Public Health Division closely monitors such situations in collaboration with regional partners from the Pacific Public Health Surveillance Network, and assists Pacific Island countries and territories in their efforts to reinforce the surveillance and response to these epidemics.

‘Though the Zika virus is known for widely circulating in Africa and Asia, the Pacific is the only region in the world to have a documented epidemic of this virus,’ added Dr Souarès.

The Zika virus first emerged in the Pacific in 2007 in Yap (Federated States of Micronesia). This was the first Zika virus epidemic detected and described in a timely fashion.

It re-emerged in the region in French Polynesia on the epidemic mode last year and it has now reached New Caledonia. There is a high risk that this disease could rapidly spread across New Caledonia and the region and affect a large number of people.

Epidemics of diseases transmitted by mosquitoes spread increasingly quickly with the amount of air traffic and weather variations (rising temperatures and modified rainfall patterns) we are experiencing these days.

The Zika virus disease is caused by a flavivirus of the same family as the dengue viruses, and it is transmitted by mosquito bites. The best way to avoid these diseases is by protecting yourself against mosquito bites and destroying mosquito breeding sites.

The Pacific Public Health Surveillance Network (PPHSN) is a voluntary network of countries and organisations dedicated to the promotion of public health surveillance and appropriate response to the health challenges of 22 Pacific Island countries and territories. Its first priorities are outbreak-prone diseases and public health emergencies in general. It was created in 1996 under the joint auspices of SPC and WHO. SPC is the Focal Point of the PPHSN Coordinating-Body.