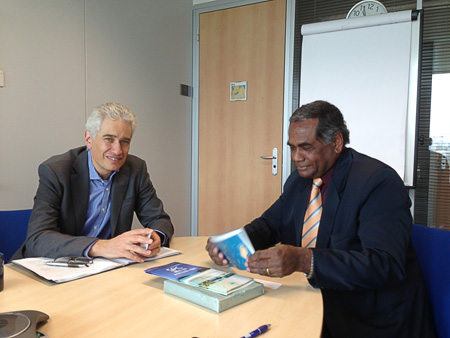 Noumea, New Caledonia -Dr Jimmie Rodgers, SPC Director-General, had a series of meeting with the Global Fund to Fight AIDS, Tuberculosis and Malaria at its Geneva headquarters.

The Global Fund is one of the biggest funders of SPC work addressing HIV and other STIs.

The Pacific has some of the highest prevalence rates for sexually transmitted infections (STIs) in the world, and people who already have an STI are at greater risk of contracting HIV. While HIV rates are low in most Pacific Island countries and territories, it is thought that there are many undetected cases.

Therefore, the introduction of rapid HIV confirmatory testing, which greatly reduces the turnaround time for HIV results, has been a welcome development as it this has helped increase the number of people coming for HIV testing in the region.

If test results are positive, people are referred for counselling and treatment – first steps toward halting the spread of HIV and other STIs.