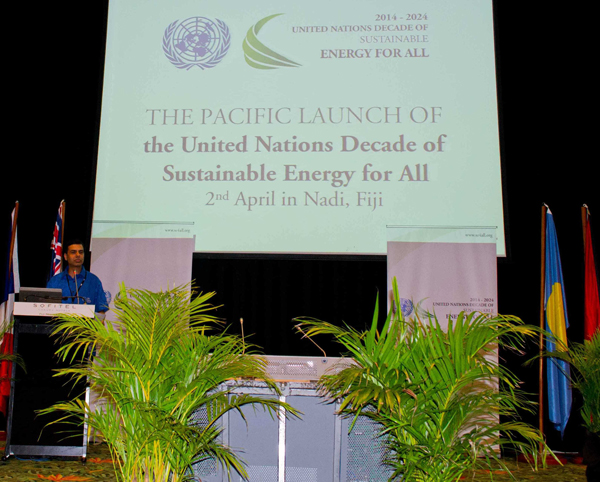 SPC, Nadi, Fiji – (Thursday 3 April) – The Pacific roll-out of the United Nations Decade of Sustainable Energy for All (SE4ALL) was launched yesterday in Nadi, Fiji, at the Pacific Regional Energy and Transport (Aviation and Maritime) Ministers’ Meeting.

In his opening address, Secretariat of the Pacific Community’s (SPC) Director-General, Dr Colin Tukuitonga, expressed his delight in the fact that the Pacific region is one of the first in the world to successfully roll-out the initiative.

‘We are just three months into this decade and I am glad that our region, despite our size and remoteness, is among the first regions in the world to mark and give special recognition to this honourable global initiative – Sustainable Energy for All,’ he said.

He recalled the 41st Pacific Islands Forum in Vanuatu in 2010, when Pacific Leaders endorsed the Framework for Action on Energy Security in the Pacific and reaffirmed their commitment to a renewable energy and energy-efficient future based on achievable, practical and voluntary targets.

The same kind of commitment was shown when Pacific leaders adopted the national renewable energy and energy efficiency targets stipulated by the 2013 Majuro Declaration on Climate Leadership.

UN Secretary-General Ban Ki-moon, in his message delivered by Mr Gyan Chandra Acharya, the Under-Secretary-General and High Representative for the Least Developed Countries, congratulated SPC on its leadership and the region’s effort to create transformative change in the world’s energy systems.

‘The Pacific Islands are demonstrating real global leadership in our shared efforts to make a much-needed transition to a new era in energy use and production. The ground-breaking Majuro Declaration on climate change includes clear renewable and energy efficiency targets. Tokelau has become the first territory in the world to generate 100 per cent of its power from renewable energy.  These and other efforts are helping to point the way to a sustainable future,’ he said.

‘Through your leadership in establishing 2014 as the International Year of Small Island Developing States, through the upcoming SIDS conference in Samoa, and through partnerships such as the Pacific Regional Data Repository, you are sending a powerful message of regional commitment to efficient, renewable and affordable energy solutions,’ he added.

The launch involved strategic direction provided by the office of the UN Secretarial General’s special representative for the SE4ALL initiative, and expressions of partnership and commitment to the SE4ALL initiative from development partners, Pacific Island countries and the private sector.

The UN General Assembly unanimously declared 2014–2024 the Decade of Sustainable Energy for All, underscoring the importance of energy issues for sustainable development and for the elaboration of the post-2015 development agenda.

Launched in 2012, the International Year of Sustainable Energy for ALL, the initiative seeks to achieve universal access to modern energy services, double the global rate of improvement in energy efficiency and double the share of renewable energy in the global energy mix by 2030 in order to spur economic growth, address global inequalities and preserve the environment.