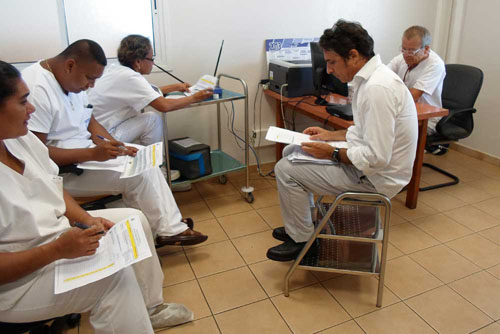 Monday, 02 September 2013, Secretariat of the Pacific Community, SPC, Noumea – The Pacific Mini-Games will begin today in Wallis and Futuna.

To protect the population’s health security during the games, the Secretariat of the Pacific Community (SPC) and Wallis and Futuna Health Agency have put in place strengthened public health surveillance mechanisms.

‘This event will significantly increase our Territory’s population and could lead to public health problems such as outbreaks of infectious diseases like dengue and chikungunya or diarrhoeal illnesses, which have to be dealt with quickly,’ said Claude Wetta, Director of the Wallis and Futuna Health Agency.

‘An SPC team of specialists in public health surveillance during mass gatherings has been working closely with us since April to set up an appropriate surveillance and response system.’

‘We’ve increased our health care team for this event. As well, a medical and paramedical team from New Caledonia has been mobilised by the Mini-Games Organising and Support Committees to help us take care of the athletes at the competition venues.’

[Health practitioners in Wallis going through the surveillance forms with a member of the SPC team.]

‘We had a similar system in place for the 11th Festival of Pacific Arts in Solomon Islands in July 2012, with rewarding results – not only during that large gathering but also afterwards, in terms of public health surveillance in general for the country’s health services.’

Eight syndromes or types of evidence of exposure to infectious disease will be monitored on a daily basis in patients seen, including members of the Pacific Islands delegations, throughout the Mini-Games, at all the host sites and at Wallis and Futuna’s four health clinics and emergency ward.

Doctors on Wallis and Futuna are already familiar with this syndrome-based surveillance method, although on a smaller scale.

The number of syndromes to be monitored has been doubled for the Mini-Games and the data collection system has been strengthened to produce daily summarised reports.

Each day, surveillance data will be collected, entered into an on-line system and then analysed. Reports will be issued once a day to the Health Agency and shared with Mini-Games organisers and all the Pacific Island countries and territories through PacNet (a Pacific Public Health Surveillance Network for health communication and alert messages). So, public health officials from all four corners of the Pacific will be able to monitor the health situation daily.

If a problem is detected, the Mini-Games surveillance team will immediately inform the Health Agency and the health response team, known as the EpiNet team.

This EpiNet team, made up of members of the Health Agency, was formed during preparations for the Mini-Games surveillance system. The team will be in charge of carrying out investigations and intervening in the event of an outbreak or other public health problem. They will be assisted by the SPC team and a volunteer provided by the Mini-Games Support Committee.

The Mini-Games offer Wallis and Futuna a unique opportunity to test a strengthened large-scale health surveillance system. There are plans for the system to continue after the games have ended, with the EpiNet outbreak preparedness and response team also remaining in place.