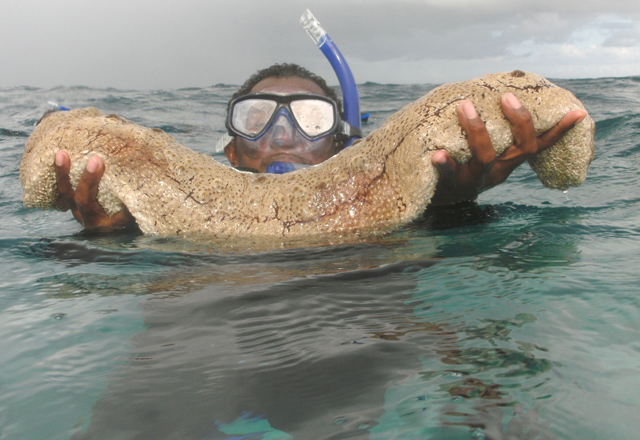 Nouméa, New Caledonia – SPC is issuing a series of country reports for the Cook Islands, Fiji, Federated States of Micronesia, Palau, Solomon Islands, Samoa, Tonga and Vanuatu covering the status of sea cucumber resources and related management recommendations.   While these coastal invertebrates are generally in decline, the situation in each country calls for specific recommendations.

A high-added-value and sensitive resource
For the past four years, the European Union-funded SciCOFish project has allowed SPC scientists to support Pacific countries with enhancing capacity in coastal resource assessments to inform management. And one of the priorities for most countries is sustainable sea cucumber fishery management. In fact, these “sea slugs” are a traditional food item in certain Pacific island and are popular in Asian countries, which has led to overfishing in the Pacific region.

Fisheries officials are concerned about maintaining this resource as it is a significant source of income for fishers, processors and exporters due to its high added value and it plays a role in communities’ food security.

Certain countries began to take action a few years ago, since they wanted this valuable resource to continue to contribute to the lives of future generations, by implementing measures which are now paying off. But whatever the exact situation may be, sustainable sea cucumber conservation requires complex management. All of SPC’s member countries made this a priority expressing concern of declining state of sea cucumber fisheries and would like to improve the current knowledge and management of this fishery. They requested SPC technical support in resource assessment and management advice.

Informative and educational surveys
SciCOFish has made it possible to train fisheries-department and NGO staff in coastal invertebrate stock assessment techniques. These training sessions have also provided an opportunity to carry out sea cucumber stock assessments at 40 sites in eight countries. So the outcomes have been two-fold, i.e. countries now have a number of trained professionals who can regularly carry out surveys plus the data collected, its analysis and interpretation.

Kalo Pakoa, SPC’s marine invertebrate specialist, noted, “Our colleagues now have the technical skills they need to carry out assessment surveys over the long-term and to interpret the data. It is important to do regular stock assessments in order to evaluate the real impact of sea cucumber management measures.”

The data collected most recently give a glimpse into the current status of stocks and can be compared to previous assessments carried out from 2002 to 2009. Of the 30 sea cucumber species found in the Pacific, certain species are high value of the beche-de-mer trade and are harvested more heavily than others. For that reason some species may be relatively abundant whereas others (high value species) have disappeared. These surveys also show that those zones where fishing has been prohibited for at least 10 years have experienced real gains in terms of the size of their sea cucumber populations.

A series of technical reports for practical management
The SPC reports provide recommendations to countries by proposing measures to be incorporated into their national sea cucumber management plans (documents can be downloaded from: www.spc.int/fame/en/projects/scicofish/activities/202-the-status-of-sea-cucumber-resources-in-cook-islands-fiji-and-samoa). Each country’s situation is quite different: some already have management plans that include strong fisheries management measures such as sea cucumber species selection, minimum harvest sizes, well defined fishing zones or bans on fishing with scuba gear. 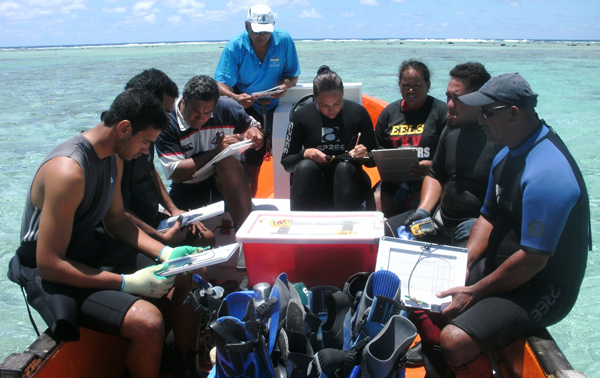 In some cases, the marketing system is also very well controlled and makes a distinction between fishing for subsistence, for local sales or for export. A permit system for processors and exporters can be set up, which allows oversight and data collection on species, quantities and the quality of marketed products.

In certain zones, work to reintroduce sea cucumber species is also planned. Kalo Pakoa says, “We can move specimens from one part of a zone where they are abundant so as to reintroduce them in another part where they have been wiped out. For example, from one zone to another within one country but also from one country to another as has already been successfully done for trochus.”

Another opportunity could be to reintroduce sea cucumbers from aquaculture farms. Sea cucumber farming is in the trial stage in various Pacific island countries at the current and further work is needed to collect proper data on survival rates in order to be able to determine the effectiveness of ranching and its applications.