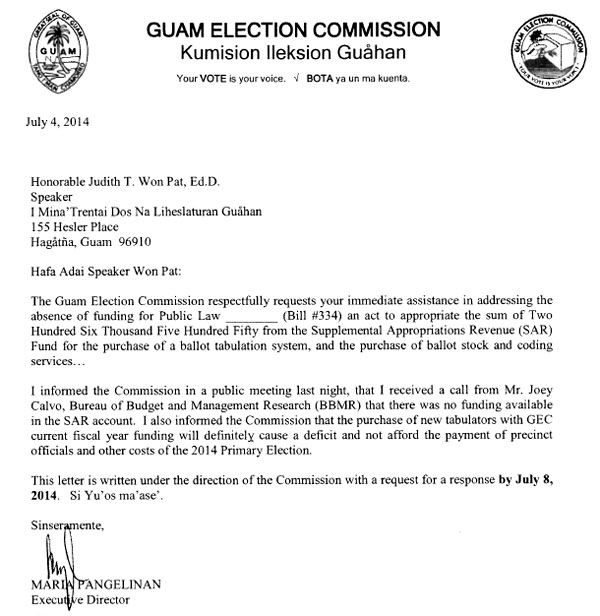 Guam – Speaker Judi Won Pat has called the Legislature into Session Monday morning at 9am to discuss the need for funding to pay for  3 new tabulating machines.

The Speaker’s Call to Session tomorrow morning, follows the Governor’s call for a “Special Session” Monday afternoon at 3pm. The Governor is asking lawmakers to pass Bill #359 which was introduced by Health Committee Chair Senator Dennis Rodriguez.   Bill #359 authorizes an additional $6-million, on top of the $2-million already allocated, for Medicaid this fiscal year.

The Speaker called Session in response to a letter she received [READ BELOW] from the Guam Election Commission seeking “immediate assistance” to address the absence of funding to purchase the machines, even though the funding was approved in Bill #334.  Governor Calvo also received a similar letter from the GEC.

Bill 334 authorized the GEC to draw on money in the Supplemental Appropriations Revenue [SAR] Fund to buy the tabulators. The Bill was passed 14-0 on June 16. Governor Calvo let it lapse into law.

The Governor’s Communications Director Troy Torres told PNC News Saturday that the Governor didn’t want to sign the bill because he knew “the SAR fund has no real revenue in it,”  but he let it lapse into law “because the machines are important to the efficiency and integrity of elections.”

Torres said Governor Calvo has asked his fiscal team to find the funding, and that may “involve [an] advance of GEC’s allotment and a solution down the line to cover the gap the advance creates.”

However GEC Executive Director Maria Pangelinan warns in her letter that using current GEC fiscal year funding “will definitely cause a deficit and not afford the payment of precinct officials and other costs of the 2014 Primary Election.”

Pangelinan asks for a response from the Legislature by Tuesday, July 8th.

READ the release from Speaker Won Pat below:

Carlson: ‘Every last penny of CARES Act will be spent; $41 million remaining spoken for’ 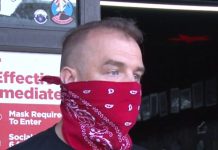 Judge to hear motion to dismiss lawsuit against lockdown

Quality Distributors to deliver over $42,000 worth of food to Salvation Army food bank