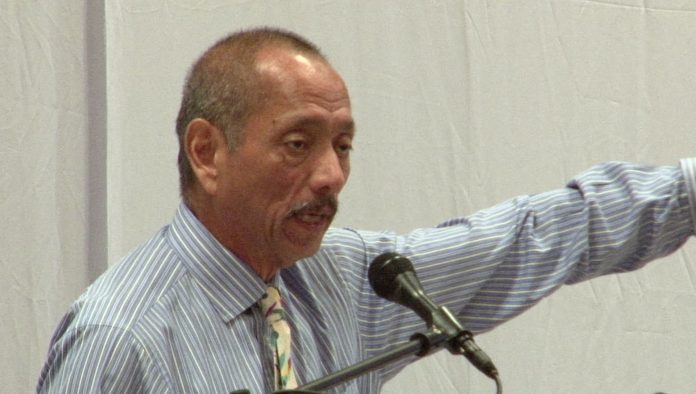 Speaker BJ Cruz was the guest speaker at the Guam Chamber of Commerce general membership meeting today at the Sheraton Laguna Resort.

Guam – Defensive and critical at times, Speaker BJ Cruz discussed several of his fiscal priorities stressing his focus on these issues are the facts of the matter: minimum wage, health insurance and retirement.

The Democrat lawmaker, speaking to the Guam Chamber of Commerce, began his presentation with minimum wage. Cruz invoked the much-criticized pay raises for elected officials as a way to illustrate the fairness of the salary adjustments. Detailing that a 90-cent increase per hour translates to about a $2,000r bump in annual pay, then comparing that to the $40,000 more the governor gets every year, $25,000 for the lt. governor, and $24,000 for senators–something he called unconscionable.

“I have spoken to many of the restaurateurs and they’ve talked to me about the fact that they want to do tip credit,” Cruz told Chamber members.  “I told them, ‘Great. Come in, I will have a hearing for 30 days, you write the section that you want on what this tip credit is going to look like.  You tell me what you want the minimum to be.’  Just don’t insult me by saying you want it to be $2.50 an hour.”

Cruz adds that he is open to adjusting his current proposal which would raise the minimum wage to $10.10 over two years to accommodate industry concerns, including wages for restaurant workers.

“You know that you’re not in agreement — I won’t call out and mention who’s not in support of tip credit, but you know that within your own selves, some of you can’t agree on tip credit,” Cruz said to Chamber members.  “Well somebody had better figure out some way of being able to do something, because a minimum wage bill will go through at some point.”

Cruz also was defiant on the subject of insurance for government employees and retirees.  He asked attendees to imagine GovGuam was their business and what they would do with a CEO who chose to grow your largest single contract needlessly by some $75 million.  That, Cruz said is what Governor Calvo’s administration has done with health insurance for employees and retirees.

“But as your elected official, I have to ask you, should I continue to take care of me or should I take the fiscally responsible thing and take, and insist that the government has to go with the most economical [plan], and the one that a right-thinking person would do,” he pointed out. “As it turned out, the choice that was made for 2016 was so wrong, that by April of last year, the [Calvo] administration ran out of appropriations authority to pay the insurance companies.  They stopped paying their premiums.”

Cruz also touched on his bill to reform retirement plans for the government and said it’s important to note this isn’t a solution for the long-term viability of the Retirement Fund, but rather prevent some 8,500 current government employees who are at risk of becoming a new welfare class.