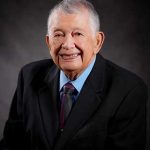 We remember the legacy of the late Speaker and Senator Joaquin C. Arriola.

On the morning of May 4th, the family of the former Senator and Speaker Joaquin C. Arriola announced his unfortunate passing.

Arriola, a trailblazer in Guam’s legal sphere, became the second CHamoru to earn a law degree. Upon obtaining higher education and experience, Arriola offered his expertise as a public servant to Guam’s people, getting elected for two terms as a Speaker of the Guam Legislature. Moreover, he was the first candidate for Governor of Guam.

Arriola was among other Guam leaders who fought for increased civil rights for the people of Guam and sought to end a single-branch form of the military government. Furthermore, Arriola aided in the efforts of overcoming Navy interference when striving for greater local self-government, ultimately shaping Guam’s limited self-government today.

In an interview with Patti Arroyo this morning, Governor Leon Guerrero shared her admiration for the late Speaker and Senator and her sadness over the news of his passing.

In a joint statement regarding Arriola’s passing, Lieutenant Governor Josh Tenorio said in part, Our island continues to benefit from the fruits of his public service, including through laws he passed to strengthen Guam’s judiciary, legal structures, hospital, health care, and public lands.”

Passing at the age of 96, Arriola is survived by his eight children, 13 grandchildren, and four great-grandchildren.

Arriola remains a prominent and impactful figure in Guam’s history, as his legacy continues to inspire generations presently and to come.