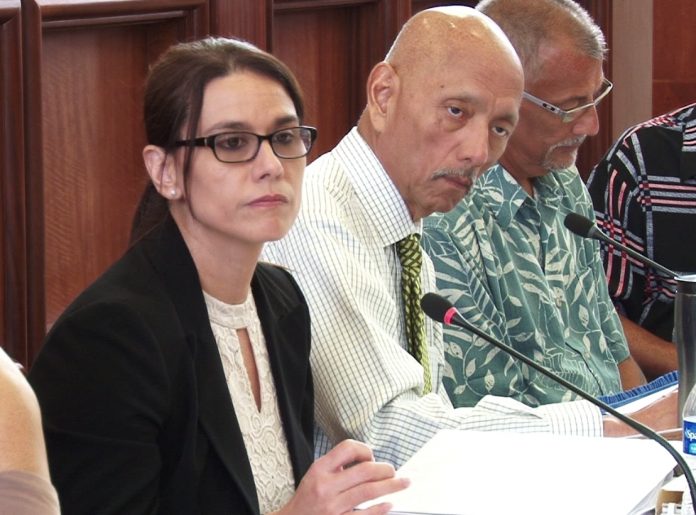 After multiple hearings, special session continued today with the Governor’s fiscal team called back to the legislature.

John Camacho, the Director of Rev and Tax, delivered a message to the Senators from the Governor: “We continue to call for the passage of Bill 1(1-S) as submitted and presented to the Legislature and to the people of Guam in the effort to pay tax refunds to our people within weeks. Your maneuverings to place obstacles in the way of doing what is right for the people of Guam smacks of political games. This is not a game. We are obligated to pay tax refunds and my original bill provides the tool to help us do that faster.”

Although there has already been a total of three hearings just last Friday, special session continued this time, with the majority of the legislative body clarifying the Governor’s bill to float a line of credit for tax returns.

“The problem is, we’re not gonna have a choice,” remarked Vice Speaker Therese Terlaje, adding, “We’re gonna deal with the ramifications…Can you give us any assurances otherwise?” she asked the fiscal team.

Christine Baleto, the Director of Administration told the senators, “You heard the passionate cries for assistance, those are real, and those are not actresses or actors. I see it every day coming into my office asking for help,” she explained.

Baleto also assured the Vice Speaker that the passage of the Governor’s bill doesn’t affect the FY18 budget, but that’s where Speaker BJ Cruz countered, saying, “This is where we disagree.”

In a statement from Adelup, the Governor chided opposition saying, “…the Calvo/Tenorio administration has provided a solution to get tax refunds to Guamanians within weeks. It is not our money, after all.  It is the people’s money.  And we should be able to provide it to them without delay.”

“Now if we use this Section 30 money as the balloon payment for this TRAN that (the Governor) wants to borrow, we’re not gonna have enough money to make the payments next year. Once we set our foot into this door, we’re going to have to keep walking through this door like a revolving door, because we would’ve spent the money we would’ve used for the following year. As much as the Governor wants to propose this is some kind of temporary carry-over, it’s going to become a permanent part of our financial structure.”

San Nicolas adds that it’s still unclear when the special session will end for Governor’s Bill 1.