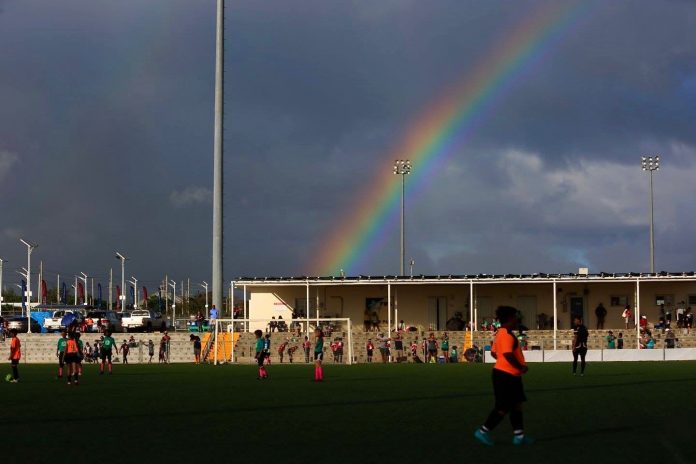 “We are excited to be bringing in Spider-Man as a special guest at this season’s Jamboree, which will coincide with the official celebration of GFA’s 40th Anniversary,”

HARMON – Through a partnership with Marvel Comics, Spider-Man will be headlining the Guam Football Association Jamboree, the season-ending event of the Triple J Auto Group Robbie Webber Youth Soccer League on Saturday at the GFA National Training Center.

“We are excited to be bringing in Spider-Man as a special guest at this season’s Jamboree, which will coincide with the official celebration of GFA’s 40th Anniversary,” said GFA Vice President Joseph Cepeda. “In addition to his appearance at the Jamboree, we’ve invited Spider-Man to Guam to deliver a strong anti-bullying message to our island’s youth in a week-long visit that also includes two public appearances and presentations at 12 of Guam’s elementary schools.

All are invited to meet Spider-Man at Guam Premier Outlets on Sunday beginning at 1 p.m. At 3:30 p.m., Spider-Man will make his way to GFA in another appearance open to the public. During his public appearances, Spider-Man will be distributing autographed postcards while supplies last.

For Saturday’s Jamboree, youth soccer athletes will be participating in a parade of teams beginning at 8:15 a.m. and after, will be receiving special GFA 40th Anniversary medals. Trophies will be presented to athletes selected by their respective clubs as youth players of the year in 2015. Two youth referees also will be honored at the Jamboree.

In Week 9 U17 matches, the W.M. Engineering Strykers take the No. 1 spot going into division playoffs after a 3-1 over Wings Red. Quality Distributors finishes ranked No. 2 with a 6-1 win over the Guam Shipyard Wolverines. The Southern Cobras defeated Community First/Days Inn Dededo Soccer Club 8-2, Wings Black defeated Tigers 7-0 with two goals each from Phoenix Pahl and Leon Morimoto and one each from Takumi Kishi, Kyle Halehale, and Anthony Moon. ASC Islanders Betde defeated Tumon Typhoons Soccer Club 10-2.

In U14 matches, the Wings and Tigers take the top two spots in division playoffs following the teams’ 1-1 draw. Sho Meyar scored for Wings and Robert Niu scored for Tigers. In other matches, Strykers defeated Tsunami Sharknado 7-0, Cobras defeated Tumon 1-0, the Wolverines defeated Quality Distributors, and Dededo defeated the Islanders 2-0.

Jamboree matches will begin at 10:15 a.m. on Saturday. Additionally, playoff matches for the U14 and U17 competitive divisions also will begin Saturday.