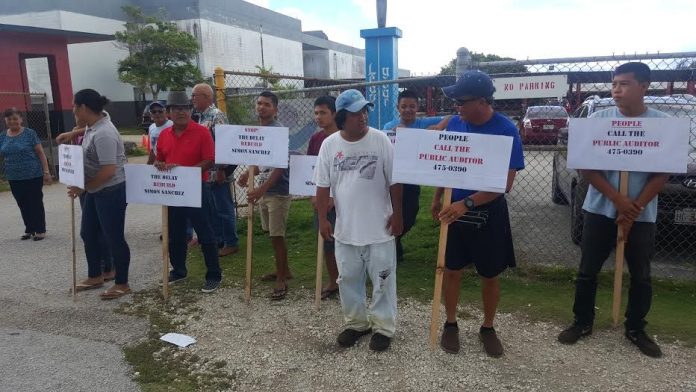 They also expressed the need for a new Yigo campus.

Guam – Students, residents, and Yigo Mayor Rudy Matanane gathered in front of Simon Sanchez High School earlier this afternoon to demonstrate against Core Tech’s latest protest, which causes further delay in the process of getting a new campus.

Students, residents, and Yigo Mayor Rudy Matanane gathered in front of Simon Sanchez High School earlier this afternoon to demonstrate against Core Tech’s latest protest, which causes further delay in the process of getting a new campus.

“It’s time. They have done the bid, someone won the bid, and what Core Tech is doing…I don’t like making accusations but it’s not about making money, it’s about building a new school because the kids need a new school here. I think we deserve it,” says Matanane.

Core Tech filed another protest last week in regards to the $100 million cap for the Request for Proposal, stating that “instead of executing a contract with a cap of $100 million, the contract allows the parties to exceed the $100 cap.” At the same time, Core Tech’s appeal is still with the Office of Public Accountability for their initial protest to the contract. Matanane says they’re starting a petition to get the process going.

Matanane says, “We have a petition going around and we probably have about 500 signatures and we’re going to be doing that until we get enough to convince the public auditor. I ask all the parents, staff, and students and family of Simon Sanchez to sign the petition. We’re going to have another demonstration if the public auditor don’t move and do what needs to be done.”

Sanchez student Jesilyn Charfauros says the school is unsafe. She says, “A lot of the problems are cracks on the floors, roofs leaking, aircons leaking and shutting down. In some of the classrooms outside the wooden floors since they’ve been for so long that the wood is soft. When they step on it, it’s so soft and feels like it’s going to fall through the floor.”

In fact, sections of the Yigo campus including the gym and the entrance to the cafeteria are still closed off due to citations from the Department of Public Health and Social Services.

SSHS Principal Carla Masnayon explains, “We have completed the exterior of our cafeteria entrance. the scraping of the gym ceiling has been completed, we’re just hoping to finish the painting of the gym ceiling by next week Friday. The staff has started painting the exterior of the building but our challenge with that is being able to paint all the way up to the second floor. Nonetheless, there has been a lot of progress in regards to painting, which was our major task.”

Another health inspection will be held next week July 29.

Masnayon says, “We’re very humbled and appreciative with the support the community has been giving Simon Sanchez High School and our journey in getting a new school. We’re hoping that process pushes through and that the decision is in our favor that we’re able to move forward with the rebuild.”