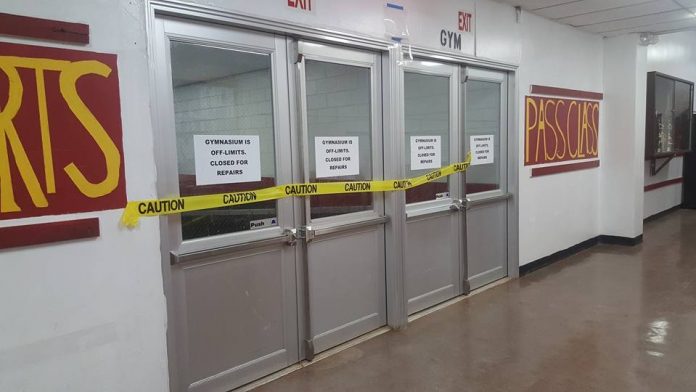 The Sanchez community is working hard to get all areas open before school starts.

Guam – It’s been almost three weeks since the latest health inspection, but the gym at Simon Sanchez High School is still closed after it was deemed unsafe.

SSHS Principal Carla Masnayon says, “So we’re trying to address leftover issues from the public health citation and that entails taking care of paint peeling especially in the science wing as well as outside the campus.”
Other areas that were cordoned off at the Yigo campus but have since been addressed include sections of the Science building and the main hallway leading to the cafeteria. However for the other problem areas, the school administration has until the last week of July to address the issues before the next health inspection.
Masnayon explains, “We are going to try our hardest but I know some of the things we’ll be able to clear in the next inspection is the Science wing, Room 108 restroom and outside the cafeteria ceiling so there’s progress but the major work is still going to be the exterior of the main building as well as the gym.”
Simon Sanchez High School Principal Carla Masnayon says they received word that they will be getting a lift to address the paint peeling off the gym ceiling in the next couple of weeks. She hopes that the gym will open in time for the next school year, otherwise…”Currently, we have about seven classes that utilize the gym, both inside and outside, so if that stays closed, then we’ll have to find alternative classes for them to do a lot of their gym work or classes so we really have to get that open before the school year starts,” she says.
Guam Department of Education Deputy Superintendent Chris Anderson estimates that the total cost for the temporary repairs at the campus is about $8-thousand dollars. That means thousands of dollars are being used to patch up the deteriorating school that will be torn down once a new campus is built. Masnayon says she hopes the process of planning for the new school goes by quickly. However, after CoreTech submitted an appeal to the Office of Public Accountability, the planning for Sanchez High has been on pause for about two months.
Masnayon says, “We’re really looking forward to getting a new school. Our students have waited and they’re very hopeful that they’re going to see it soon. With this process, we hope that it goes fast or addressed quickly so that this process can move forward. The longer we wait on it, the longer the students will get their new school.”
Meanwhile, the school administration, faculty and staff are working on Operation Pintura. They’ve teamed up with the Guam Home Center, where they give community members wanting to donate paint and help repair Sanchez a good deal.
Masnayon explains, “So far, we’ve got about 18 pails. Guam Home Center donated about 10 pails and we had several teachers who bought pails and donated to our school so we’re very happy and thankful. We welcome any help, they can just call the main office and if they want to come in, we can accommodate them.”