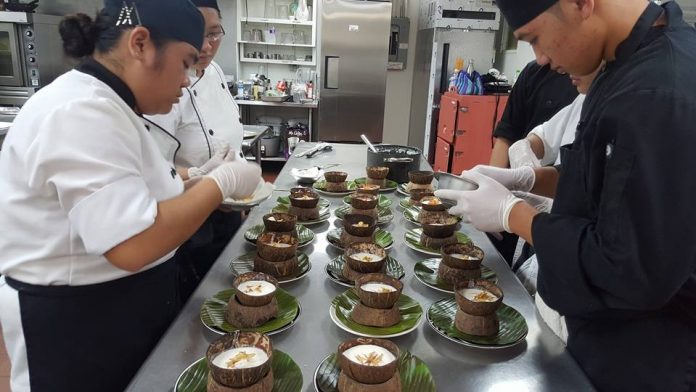 Guam is hosting this year’s FestPac from May to June. The festival takes place every four years, bringing together artists and cultural practitioners from around the Pacific region for two weeks of cultural celebration.

Guam – There’s about four months left until the biggest cultural event in the region. We’re talking about the Festival of the Pacific Arts. In anticipation of the big event, students around the island are making preparations by getting to know and then welcome the 27 Pacific Island Nations. A group of Simon Sanchez High School students are more than ready for FestPac.

SSHS Student Jho’nae Camacho says, “Today we are celebrating Tourism Academy celebrates FestPac. So the ProStart and LMP juniors, we collaborated last quarter. We did a project-based learning. We’re divided into five groups. We did research on 1 of the 27 Pacific island nations that will be coming here.”
Students in the Guam Community College’s Lodging Management Program “adopted” a Pacific island nation and presented information about their respective countries to special guests today
For example, Jho’nae’s team chose the island nation: Fiji. She gives us a fun fact. Jho’nae explains, “In Fiji, as a sign of respect, they don’t wear hats in houses and they dress modestly away from our hotels. Don’t wear your bahakis away from the hotel.”
Meanwhile, Sanchez ProStart students, in collaboration with their LMP counterparts, researched cuisines of their respective Pacific island nation and prepared a meal. Here are a few of the dishes served today.
SSHS Student Marc Jan Landingin says, “This is the traditional Cook Island’s fish fingers. This dish is breaded and deep fried in coconut oil and served with pineapple relish.”
SSHS Student Kyle Gaerlan says, “This is a classic Fiji dish, it’s cubed mahi mahi fish and simmered in coconut milk.”
SSHS LMP Instructor Eric Chong explains that this FestPac project-based learning aligns the Tourism Academy with a significant community event – in this case FestPAC – to make learning engaging and relevant to the lives of the students.