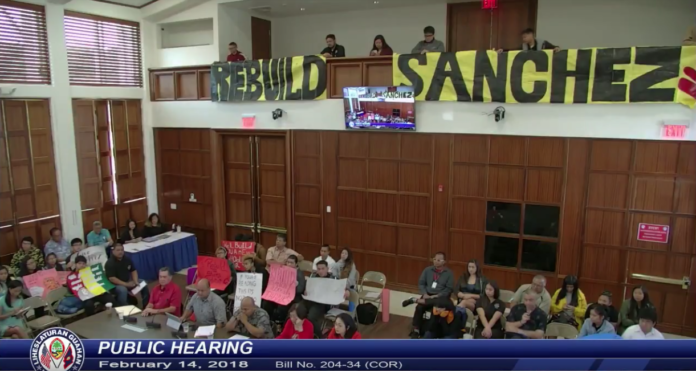 Guam – Simon Sanchez High School students filled the legislature’s public hearing room this morning(Weds.) to push for the rebuilding of Simon Sanchez during a hearing on bill 204 which would take away procurement duties for the re-construction from DPW and instead give the procurement responsibility to GDOE. The two companies involved in the protests that have stalled the construction of the high school also testified.

The procurement process for the reconstruction of the northern high school has been stalled due to protests of the award to the Guam Education Finance Foundation or GEFF from Coretech International. DPW has been in charge of this procurement that has received numerous protests. So, bill 204 proposes giving the procurement power to GDOE. The measure would allow GDOE to “make a written determination that the award of the contract without delay is necessary to protect substantial interests of the territory.” The measure was crafted for the most part by GDOE.

GEFF Director Phil Flores testified in favor of the measure but with some suggestions. “We believe it should specifically specify that DOE shall first solicit for the design construction management and financing renovation or construction of the educational facility under a 30-year leaseback arrangement. Financing may be implied but it would be better to be specifically included in this section as this is a critical component of the funding for preconstruction services as well as reducing the overall cost of the leaseback,” said Flores. Flores also suggested clarifying that the project be awarded in two separate contracts and that the vendor of phase one which would be the design planning and financing phase be unrelated to the vendor of phase two which would be the actual construction phase.

Coretech representative attorney Joyce Tang testified saying that they are in favor of GDOE being in charge of the procurement process, but Coretech still has three main concerns with the bill. “First bill 204-34 deleted a critical definition regarding the definition of what constitutes a responsive offer and repeals the definition of responsiveness both enacted by public law 34-19. The bill also refers to the solicitation as a general solicitation quote unquote. It should be made clear that the solicitation should be by invitation to bid not a general solicitation. We don’t know what general solicitation means,” said Tang. Another concern is with the separate out-scope procurement of the design, CIP development, construction management, collateral equipment purchases and long-term capital maintenance planning. Tang says that the bill is not clear about how GDOE will procure these out of scope services from one or more entities, what procurement rules will apply and the funding mechanism for this procurement. Finally, Coretech is concerned about the requirement that the award be made to the offeror with the lowest annual leaseback payment. Coretech believes the award should consider the lowest annual leaseback interest rate and not just the leaseback payment amount. Coretech says the current version of the bill will give rise to future protests and delays.

All technical procurement aspects aside the bottom line for Simon Sanchez Highschool students is that they simply want their ailing dilapidated campus rebuilt. “We don’t ask for a fancy school. The gym doesn’t even need to be airconditioned. Sanchez life made us appreciate everything from using the library as a classroom, getting wet while waiting for the bus after school, and even using a toilet without a door,” said SSHS Senior Joyce Martin. Numerous students testified this morning all with the same basic message that they are tired of waiting and that they want the island’s leaders to figure out some way to get Simon Sanchez Highschool rebuilt.