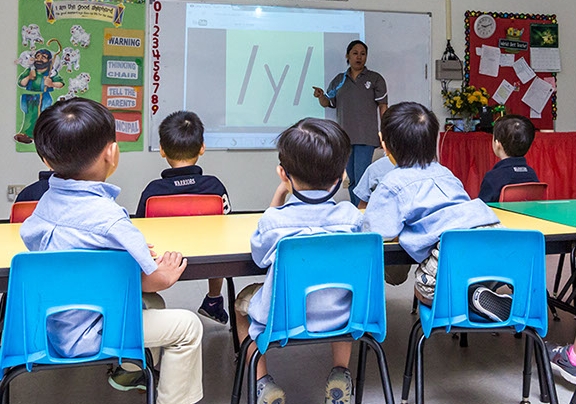 With technology continuing to evolve, many schools are trying to incorporate it into the classroom whether it’s using educational apps for students to learn better or maybe even learning robotics.

Guam – One school is up for the challenge: Saint Paul Christian School.

SPCS Manny Inciong says, “By using technology to peak their interest, I think it’ll be our advantage to work with the kids better and help them succeed better in the future so we’re very excited.”
Saint Paul Christian School administrators are excited about a new program that they will be implementing this coming school year. They call it the McGraw Hill StudySync. In fact, Principal Yvonne Inciong says they will be providing each student with an iPad that already has the program installed and ready to go.
Inciong says, “We are used to the teacher textbook student taught in our school system but what makes it different with this program is that the teachers become the facilitators and facilitating the kids on their Ipad.”
Inciong says Saint Paul will be the first school on island to incorporate this type of teaching style. She says the program is equipped with regular subjects such as Language Arts, Math, and Science and it even uses Common Core standards. Inciong says students can even choose any elective they want. Some of the electives include Robotics Nursing, Agriculture, and Forensic Science.
Inciong says, “For example, in Language Arts class, if a teacher says okay 20% will come from the different labs that are being offered here at the school. If a student is interested in Journalism and a teacher is offering Journalism as a lab class, that student would go and attend that class in Journalism where they can learn more about that career.”
Inciong says the goal is to get students interested in learning and at the same time getting them prepared for college. She says, “This is our time to really incorporate and soak ourselves, our teachers and faculty to learn about this new program and allow it to just allow its way into our students’ lives so we’re excited.”