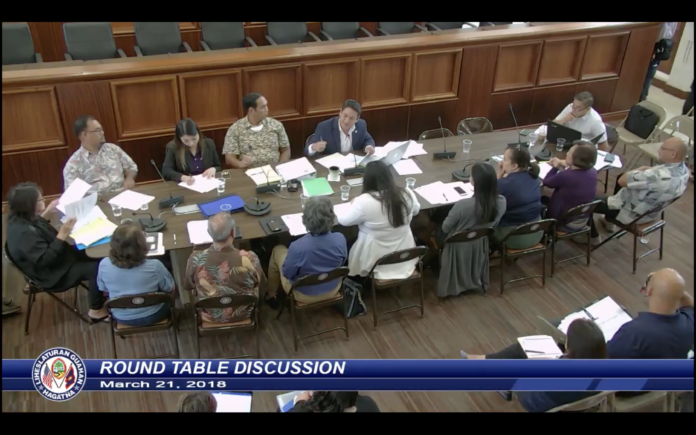 Guam – At the very first Charter Schools roundtable meeting today, stakeholders disagreed on the what the extent of the Guam Department of Education’s involvement should be with charter schools.

Present were representatives from Guam’s current charter schools–Guahan Academy Charter Schools and iLearn Academy, as well as a representative from SIFA, which is scheduled to open in August–Public auditor Doris Flores Brooks, Education Superintendent Jon Fernandez and members of the Guam Education Board and the Guam Academy Charter School Council.

During the discussion, both iLearn Chief Operating Officer Helen Nishihira and GACS consultant Marilyn Manibusan noted that their students have done well in their standardized testing scores.

Nishihira also talked about the challenges of getting $8.6 million cut from their budget in the middle of the school year but noted that, along with the rest of GovGuam, they’re trying to rise to the challenge.

Manibusan gave a similar message in terms of having to deal with a reduction in funds.

But it was in the discussion on the extent of GDOE’s involvement with the charter schools as well as whether charters need to follow GovGuam procurement procedures that opposing views were most glaring.

Manibusan questioned the presence of GDOE on the charter schools council, stating the law that created them intended charter schools to be separate from the department. She also added that one of the sections creating charters said they should exclusively handle their own accounts.

“We are all for accountability. I mean, we are. We’re not saying we shouldn’t be, we are trying. Like we said, we’re the first charter school and we’re trying our best. We don’t do things purposely and intently so we can defy the law,” said Manibusan.

This was a different point of view from GEB Chairman Mark Mendiola:

“I think it should be very clear to everybody around the table that if the Department of Education is going to be sharing its funds to help with the charter schools, that they, too, also go under the same scrutiny that we undergo,” noted Mendiola.

“I believe the procurement process is necessary because we’re using government funds and we should have some–we were just talking about having accountability. And that’s one of the biggest things. My main concern with how each charter school is using the funds that were given from the Department of Education,” said Oguma.

Public Auditor Brooks gave her input, saying, “when the legislature passed the law, they said charter schools must follow GovGuam procurement regulations, therefore when you take money from a government, there are strings attached to it.”

Fernandez says, however, that both he and the board have asked for either full separation of GDOE from charters or to allow GDOE to have greater control over charters.

Senator Castro was only able to tackle one of the topics on his agenda due to time constraints. He’ll be scheduling another roundtable in April for the charter schools to discuss their governance.