Guam –  The State and Local Anti-Terrorism Training (SLATT) Program has been successfully completed on Guam and in Saipan.

A release from U.S. Attorney Alicia Limtiaco states that after a eyar of planning, the program was presented by the the U.S. Department of Justice’s Bureau of Justice Assistance (BJA) ProgramU.S. Attorney’s Office for the Districts of Guam and the Northern Mariana Islands, the Guam Homeland Security/Office of Civil Defense, the Commonwealth of the Northern Mariana Islands Office of  Homeland Security and Emergency Management, the Joint Task Force-Homeland Defense.

The SLATT Program was conducted on Guam (April 23-24, 2013) and on Saipan (April 25-26, 2013). The specialized workshop on April 23, 2013, was comprised of 162 Guam participants from various law enforcement, hotel and private security, military anti-terrorism personnel and other community leaders. The SLATT Train-the-Trainer workshop held on day two, was comprised of 76 law enforcement homeland security personnel.

On Saipan, the specialized workshop on April 25, 2013, was comprised of 147 participants from different state and federal agencies in the CNMI. An additional workshop was held on April 26, 2013, where 32 individuals from various law enforcement agencies were invited back to participate in SLATT Train-the-Trainer course. This was the first time the SLATT Program was held in the Commonwealth of the Northern Mariana Islands. 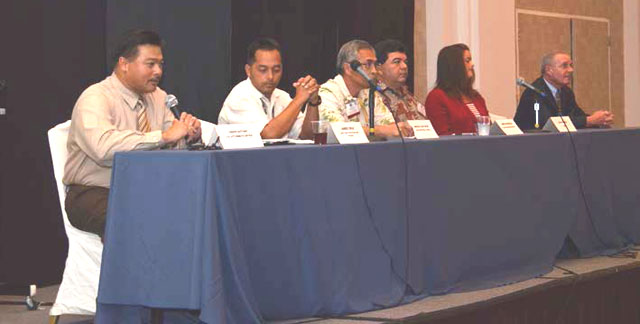