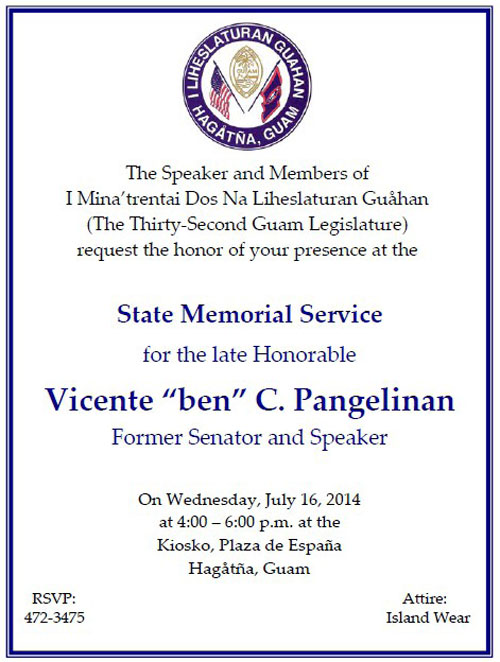 Guam – Speaker Judi Won Pat has called the Legislature into Session this Wednesday, July 16, at 3pm for the State Funeral for the late Senator Ben Pangelinan.

Lawmakers will first convene  in the Legislative Session Hall.  The senators will then recess for the committee of the whole at the Plaza de Espana in Hagåtña, where a State Memorial Service honoring the late Senator and former Speaker Vicente “ben” C. Pangelinan, will be held from 4 p.m. to 6 p.m.

This is a public event and all guests are asked to gather directly at the Plaza to pay their last respects to Senator Pangelinan. The State Memorial Service will include the State presentation of a resolution, proclamation and official wreath. The service will end promptly at 6 p.m. There will not be a viewing until the family funeral at the St. Francis of Assisi Church in Yona on Friday.

The funeral mass for Senator Pangelinan will be held Friday, July 18th at St. Francis of Assisi Catholic Church in Yoña after which he will be laid to rest.