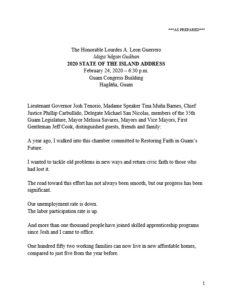 “I am proud to report that the island is stronger than it was just one year ago,” declared Governor Lou Leon Guerrero in her second State of the Island Address Monday night at the Guam Congress Building.

She touted the accomplishments of her first year in office and her plans for the future during a speech that lasted just under an hour.

Among her plans are universal health care for all island residents, a lifeline rate for trash collection, building a new public hospital, reviving an inter-agency council on homelessness and continuing to press for a One-Guam approach to the military buildup.

Among the accomplishments she said are lower unemployment rate, ending the costly receiverships over Guam’s landfill and the payment of war claims to over 600 manamko’ who “have lived to see checks they never thought would come.”

“By nearly every unbiased measure,” declared the Governor, “our government is operating more efficiently” and “we are paying down more debt and working with less General Fund revenues than our predecessors.”

“Tonight, I call on this body and on our community to start the task of ensuring
universal health coverage on Guam through a system of public self-insurance,” declared the governor.

She said universal healthcare would “become the primary focus of my policy team in the coming year.”

Coverage could be provided through existing provider networks. The proposed Self Insurance Plan “will require us to pool every dollar the government spends on healthcare,” she said.

Guam Memorial Hospital, said the governor, is being held together “by the sheer hard work and imagination of its facility staff.”

Following meetings with federal officials, the governor said “we have several public and private financing options for a co-located new GMH and public health facility.”

But she cautioned that “this will take planning, and the option we choose will be driven by our government’s financial health.”

“This need is my central priority,” she said.

The governor said that she is doing all she can to ensure that Guam remains free of the coronavirus.

“Our pandemic response plan has worked to keep Guam safe and open to the world,” she said. That includes working with the Centers for Disease Control and public health officials to screen visitors from impacted countries before they board planes for Guam, and screening potentially symptomatic passengers before they deplane here.

She said she has asked every organization holding large international events on Guam to join in our screening efforts.

She painted an optimistic picture of the economic impact from the virus, saying tourist arrivals “year to date are still in the black” and “federal and military spending are at record levels.”

“The fundamentals of our economy are strong,” said the governor, adding that her fiscal team “is keeping a close watch on the situation” and “preparing for all possibilities.”

The governor also declared “our dengue fever outbreak is over” referring to the more than 40 days that have passed since the last known confirmed dengue fever case.

Referring to the current spat between the administration and the Chamber of Commerce, the governor said: “Our minimum wage is set to increase by 50 cents next week—and it will.”

Minimum wage workers are “not a part of the threat” posed by the coronavirus, said the governor, referring to the latest spat between her administration and the Guam Chamber of Commerce over the looming March 1st minimum wage increase.

Minimum wage workers “should not be seen as a primary overhead expense,” quoting from a recent Chamber letter, “but as an investment in our greatest asset—our people.”

The governor  highlighted last year’s machete attack in Mangilao saying it “could have happened to any of us, and it proves that we must stem the rising tide of crime on our island.”

“Instead of closing police and fire stations,” said the Governor, “we’ve added nearly 100 new officers to the Guam Police Department, the Department of Corrections, and the Guam Customs & Quarantine Agency.”

She pointed to the public safety town halls she sponsored since that machete attack which resulted in the introduction of her Safer Guam Initiative which called for legislation to “aggressively recruit 100 new police officers, installing traffic cameras, regulating alcohol access, stopping drugs at our borders, ending plea deals without hearing the voices of victims, and denying parole for violent or sex-related offenders.”

The governor asked lawmakers to give her measures “a hearing, put them on the floor, and vote on them so that our people can feel safe again.”

She spoke about the progress that has been made correcting issues at the island’s prison, saying her administration has reached out to both the National Institute of
Corrections and the Federal Bureau of Prisons for technical assistance.

“We recruited over 40 new officers, with 20 more on the way, altered shift schedules to limit burnout, stabilized management, and enacted new laws that will limit contraband and augment our number of staff officers,” she said.

And she also touched on the scourge of drug addition which is often the cause of so many crimes.

A new drug detox unit will be opened in a few weeks at the Guam Behavioral Health and Wellness Center and in March ground will be broken on the first-ever Women’s Drug Addiction Center.

The governor said she would veto “any budget bill that removes” the provisions in her 2021 budget that includes the first phase of salary increases for teachers as well as nurses.

She also highlighted the $1.1 million she transferred to Guam DOE to fund the next phase of the reconstruction of Simon Sanchez High School, “putting this project back on track,” she said.

The governor also spoke about the importance of getting students’ input on educational issues saying that in the coming days she would convene “The Governor’s Youth Advisory Council” which would be comprised of high school and college-aged students. The council will “have direct access to me and to our administration. Students, we are listening.”

The governor said that the construction phase of the Guam buildup is about 10 percent complete, and there is another $8 billion to be spent on construction activity over the next seven years.

The need for skilled foreign labor is an important aspect of the buildup and she noted that the island has “gone from 100 percent denial of H-2 labor certifications to 100 percent approval” under the “One Guam” umbrella strategy.

“Our responsibility as the stewards of our island environment goes beyond any dollar figure—it is a moral obligation,” said the governor.

She cited the Zero Waste initiative which has generated two proposed demonstration projects.

One project would “literally turn waste into wealth” by turning GWA’s bio-solids into potting soil on an industrial scale” and another would create a recycled glass refining center.

“These projects will save ratepayers money, lengthen the use of our existing
landfill, meet strict safety standards, and create new private sector jobs for Guam,” said the governor.

She also called illegal dumping “abhorrent” and she noted that some families may not be able to pay the cost of trash collection “but this doesn’t mean trash should be dumped in plain sight.”

“Senators, I will work with you to establish a lifeline rate for struggling families, making trash disposal affordable for everyone,” said the governor. “There is no excuse to trash Guam!”