Guam –  A two-foot long model canoe has returned to Yap, Micronesia, where it will be restored and preserved by a local group of carvers. Included in the group is the son of the man who first made the model for a special US Sailor seven decades ago.

The canoe has traveled thousands of miles on its journey home. It was carved as a gift for a US Navy sailor who served in the Pacific during World War Two. Chief Pharmacist’s Mate Francis Wilson was one of a pair of sailors who helped to battle an outbreak of yaws, a crippling tropical infection, on the Atoll of Ulithi during the war. The other was physician and author Dr. Marshal Paul Wees.

According to 1950 article in the “Saturday Review,” “Dr. Wees was sent by the U. S. Navy to cope with a terrible scourge of yaws with which the people of Ulithi were afflicted… With a minimum of medical supplies and no assistance but the aid of a pharmacists’ mate, Dr. Wees accomplished his mission and eliminated yaws.”

The islanders gave Pharmacists Mate Wilson the canoe along with other gifts of thanks and friendship when the two Navy men left Ulithi. The model is over two feet long and nearly a foot wide from the edge of its outrigger to the hull line. Wilson’s son located the canoe among his deceased father’s effects earlier this year and coordinated the donation through “Habele,” a US-based nonprofit organization that supports students across Micronesia.

[James Hapdei holds a model canoe in Yap, Micronesia. The model was a gift from his father to Francis Wilson, Chief Pharmacist’s Mate, who helped treat a Yaws epidemic during World War Two]

Habele reached out to long-time partner “Waa’gey,” a local partner group in Yap that preserves and revives traditional island skills such as carving and weaving. Waa’gey has been crafting full size traditional canoes by pairing older master carvers with high school aged students. Among their volunteers is James Hapdei, the son of the man who first carved the canoe model for Wilson during the war. The group offered to make repairs to the slightly deteriorated model and display the canoe for islanders and tourists to enjoy.

The model is a faithful and detailed representation of the Caroline Island dugout sailing canoes that are emblematic of Yap and appear on the Yap State flag. It is believed to be the oldest Outer Island style canoe model in all of the Federated States of Micronesia (FSM).

“Waa’gey is receiving a valuable artifact from an interesting period in Ulithi’s past, when model outrigger canoes were not just souvenirs for tourists but taught young people how to make real canoes.” explains Anthropologist, Barbara Wavell, an expert on Caroline Island carvings and author of “The Arts and Crafts of Micronesia.” “Model canoes were also used in traditional rituals or as toys for young boys.” 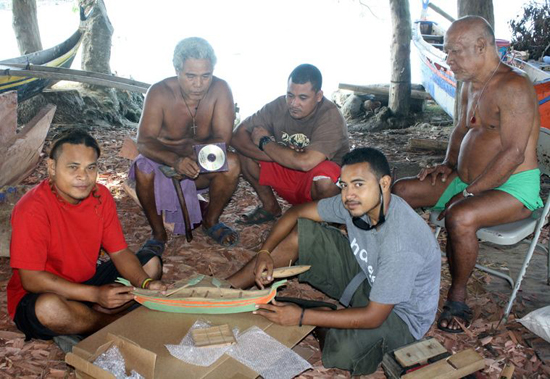 [Master and apprentice carvers from Waa’gey examine the donated canoe model and prepare plans for its restoration and display.]

The medical work of Francis Wilson and Dr. Marshall Paul Wees were chronicled in the 1950 book “King Doctor of Ulithi.” The text makes specific mention of the model. The canoe model is also nearly identical to one depicted in “The Ulithi Encyclopedia,” a text authored by US Navy Lt. John Loudon Vollbrecht and other sailors in 1945.

“Holding this canoe feels like one has reached through time and touched the past,” explained Larry Raigetal the founder and director of Waa’gey. “As modern day canoe builders, it gives us an incredible sense of motivation and participation in our past. We are so grateful to Luke Wilson and Habele for this donation, and this trust”