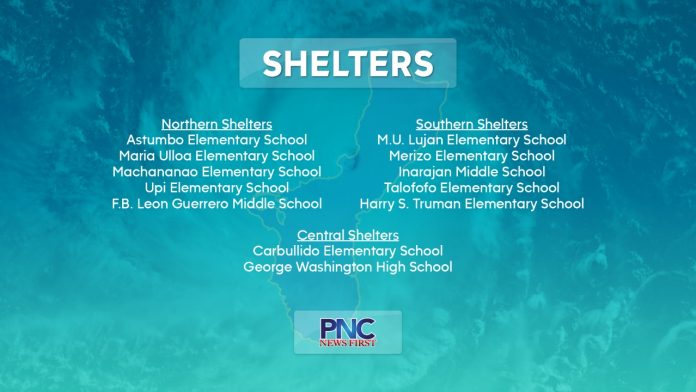 Guam – The progression of Typhoon Mangkhut neccessitates emergency storm shelters to open sooner. All shelters based out of Guam Department of Education schools will now open at 6pm tonight, instead of 6am tomorrow morning with a Typhoon Warning now in effect.

Emergency Storm Shelters are as follows:

As of 1pm, the eye of the storm has been located near 15.1N Latitude and 154E Longitude, continuing its track west at 23 mph. which it is expected to maintain through Tuesday taking Typhoon Mangkhut through the Marianas as soon as Monday night.

Governor Eddie Calvo and Joint Region Marianas Commander Rear Admiral Shoshana Chatfield plan to declare the island in Condition of Readiness (COR) 2 by 7pm tonight, in anticipation of typhoon-force winds within the next 24 hours.

Rules and proceedures during your stay at all shelters are as follows:

1. RESPECT: Be respectful to fellow residents and staff. Shelters will not tolerate foul language, abusive behavior, stealing or destruction of property. Sleeping hours will be announced and should be kept quiet at all times.

2. TRANPORTATION: Contact  or report to your respective village Mayor’s Offices for busing to and from shelters.

4. REGISTRATION: A form of identification is required to register.

5. NOTIFY SHELTER STAFF: Should you have Tuberculosis or flu-like symptoms.

6. BANNNED ITEMS: Alcoholic beverages, illegal drugs and weapons are not allowed within shelter grounds. Anyone under the influence of or found with these items will be asked to leave, may to turned over to law enforcement, and will not be admitted or readmitted into shelters. Cooking or gas stoves will not be permitted. Pets are will also be banned from shelters, therefore you are advised to seek shelter for them elsewhere as soon as possible.

7. NO SMOKING: Smoking is not allowed on shelter grounds as they are within school premises. However, smoking beyond school campuses within designated smoking areas are  allowed. Please dispose of cigarette butts properly.

8. THE SHELTER WILL NOT BE RESPONSIBLE FOR: Stolen items, especially vital documents (Birth records, passpports, I.D.s, etc.) which should be kept on your person at all times. Also, Children must never be left unattended.

9. DO NOT LEAVE SHELTERS UNTIL COR 4 HAS BEEN DECLARED!

Continue to monitor Typhoon Mangkhut with PNC News First on Fox 6 and ABC7 as well as online at pacificnewscenter.com, Facebook and Instagram. Live radio updates will also be made available on our sister stations, NewsTalk K57, Power 98, 105.1 KatFM and 99.5 The Shark.