So far it has traversed more than 27,000 miles over the past four months.

“The U.S., through an effort by crews like Stratton, is strengthening long-standing military relationships and encouraging the development of a strong defense network with allies and partners,” said Capt. Bob Little, commanding officer, USCGC Stratton.

“Within the Indo-Pacific, Oceania, also known as the Blue Pacific, is emerging as a center of gravity in the great power competition between the U.S. and its allies and others with a different vision. This combined team is what puts the national in National Security Cutter.”

The most common violation discovered involved failure to transmit a signal on VMS, designed to help provide visibility of fishing activity in the region. The USCG’s portable observation drone, the Scan Eagle, was used in support of these boardings to identify targets, do initial inspections, and keep a watchful eye on the teams.

In the EEZs of other nations with whom the U.S. has bilateral agreements, the Coast Guard won’t conduct boardings without a shiprider from that county aboard to exercise their sovereign authority. However, Scan Eagle can be flown and provide visual proof and maritime domain awareness of vessels operating in the region and their activities — valuable information. 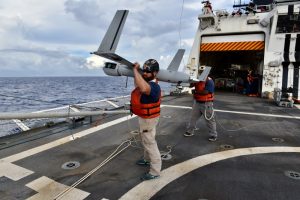 From Operation Talisman Saber off Australia to Sama Sama in the Philippines and Cooperation Afloat Readiness And Training in the Far East, these mariners have worked diligently with counterparts from the U.S. Navy and partner nations. They’ve run countless joint drills simulating surface warfare and supporting other Department of Defense elements — such as the protection of U.S. Marines landing to the beaches of Australia in a simulated liberation assault.

For weeks this team located, identified, and reported all contacts. All relayed back to the U.S. Navy Surface Action Group or shoreside controllers using various systems, including Centrix, a chat system operated at a secret level, or through daily operations summaries. Stratton picked up anywhere from one to three shadows during this time, primarily Chinese intelligence-gathering ships.

“Two-thirds of our staff, including us, the CIC supervisors, are new this patrol,” said Senior Chief Petty Officer Seth Roedl, CIC supervisor.

“It’s critical for this watch to come together and work as a team. Some of these folks have been at command centers, other cutters, or right from “A” school. They’ve stepped up. I have thirds (3rd class petty officers) qualified well and standing watch supervisor, usually an E-5 or E-6 position.”

In recent simulations on the USCGC Stratton, a watchstander relays a report of an incoming missile attack to the watch supervisor who alerts the bridge.

“Now all hands brace for shock. Missile inbound port side” echoes through the ship over the address system known as the 1MC.

As Combat Information Center (CIC) maintains the operational picture, the tactical action officer (TAO) takes steps to defend the ship, the helm and navigation watch take evasive action to avoid further missile strikes by maneuvering the boat, and damage control teams are dispatched throughout the vessel to investigate, make reports to the bridge, and mitigate any losses. The crew practices some or all of this routine almost daily.

“We’ve adjusted to the Navy mission and integrated into the Department of Defense structure for joint surface warfare,” said Roedl. “Team Stratton provides useful data to our partners during these engagements and exercises, and we’re taking back experience to share with the Coast Guard fleet.”

Stratton is the third commissioned 418-foot NSC and homeports in Alameda, California. The 150 crew have been on deployment under the operational control of the Navy’s Seventh Fleet in the Indo-Pacific since June conducting joint missions. Their patrol will conclude in mid-November.