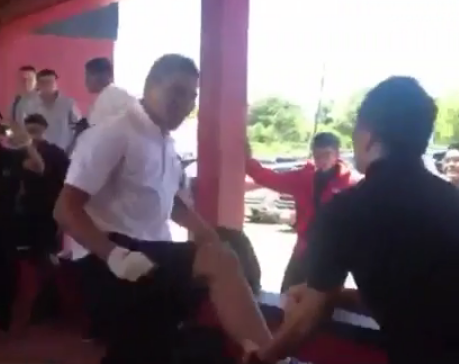 Guam – Video of an organized street fight at Simon Sanchez High School yesterday has shown up on social media.

“School administrators addressed the situation,” Malay said “(And we’re determining) what other types of actions need to be taken.”

PNC found videos of students from other school s engaging in the same behavior and not just on school campuses.

Professional MMA Fighter Frank Camacho is disappointed to see the trend as he says the Mixed Martial Arts are dangerous to mimic outside the professional ring.

Camacho has a background in wrestling and Brazilian JiuJitsu and fought on The Ultimate Fighter which was broadcast live nationwide but he says he’s never gone to a street fight in his life.

As for his message to the young people who’d like to mimic his performance he says MMA is an art that takes a lot of discipline and training.

“You only see 15 minutes of Frank The Crank Camacho you know, three five minutes rounds is the most you’re gonna see you see me perform.”