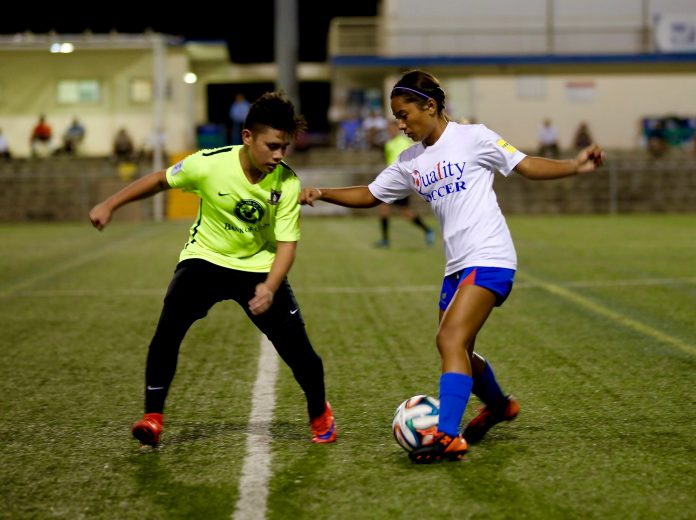 The Bank of Guam Strykers escaped with a narrow 3-2 win over Quality Distributors in its first of two Week 3, U17 division matches.

HARMON – The Strykers (2-1-1) managed to hold on to its No. 2 position in league standings, while keeping Quality (1-2-1) at the No. 3 position with only two more matches before single-elimination league playoffs begin Oct. 8.

Strong defense on both ends of the pitch created a stalemate up until the 39th minute when a back-heel shot in front of the goal by Eric Kim off a corner kick play gave Quality a 1-0 advantage through to halftime.

The Strykers’ Tevin Pangelinan later found the back of the net on a goalmouth scramble to knot the match at 1-1 about five minutes into the second half. Seven minutes later, the Strykers launched another successful attack to take the lead for the first time in the contest at 2-1. Clayton Mitchell battled through a host of Quality defenders, moving across the goal and managed to get the ball to teammate Alan Thomas, unmarked on the left side for the finish.

Quality later leveled the match for the second time in the 64th minute after Jason Kim finished an Eric Kim cross from the right side. About ten minutes later, the Strykers were handed a golden opportunity to take the lead again on a penalty kick after referee David Drews charged Quality with a hand ball violation in the box. A successful spot kick by Mitchell gave the Strykers the 3-2 advantage and the team held on for the win.

In the evening’s other match, Wings Black (1-2-1) earned its first victory with a forfeit win over their Red counterparts. Despite the loss, Wings Red (2-1-1), although tied with the Strykers on points, still hold onto to the top position in league standings based on head-to-head competition.

The teams next play on Saturday, with Quality taking on Wings Red at 9 a.m. on United Airlines Field 2, followed by the Strykers against Wings Black at 11:30 a.m.