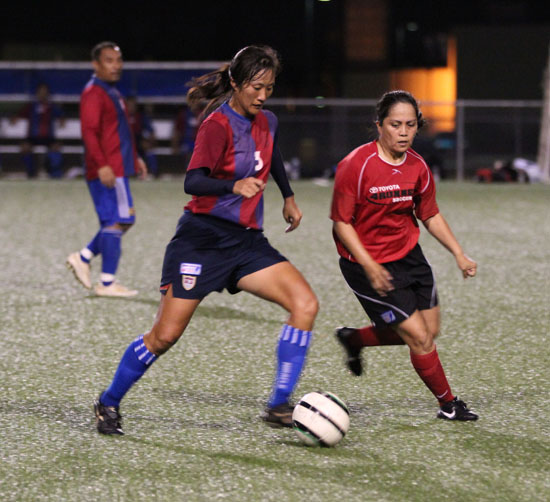 Guam  – The Paintco Strykers move up to 1-1 after picking up a 2-0 win over the 4Runners in the Bud Light Masters Co-Ed Soccer League Saturday at the Guam Football Association facility in Harmon.

The Strykers broke the scoring silence in the 67th minute, finding gaps in the 4Runners’ defense and setting up a successful play to the goal. After taking a short pass from Peter Quiambao, Julio Gonzales quickly turned the ball to Keith Dickson, who finished the play with a goal from near the right post for the 1-0 advantage.

Six minutes later, Gonzales went one-on-one with 4Runners goalkeeper Ricky Tyquiengco after taking a pass from Camren Kane for the final score with 15 minutes still left to play in the contest.

[The Paintco Strykers’ Kyung Shipman stays in control of the ball as the 4Runners’ Jane O’Connor stays close on defense in a Bud Light Masters Co-Ed Soccer League game at the Guam Football Association facility in Harmon. The Strykers won 2-0.]

Bud Light Masters Co-Ed Soccer League action continues Saturday with the Rovers FC Royal taking on the 4Runners at 6 p.m. Big Blue and the Strykers take to the turf in the day’s late game at 8 p.m.