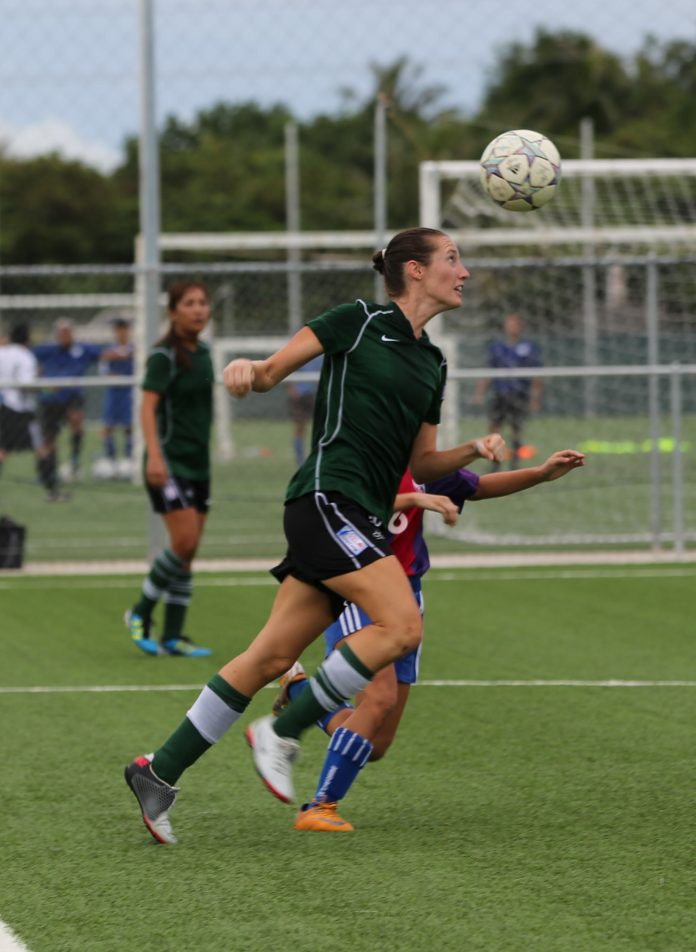 Harmon, Guam – The Paintco Lady Strykers’ Alexy Barbe came through in the clutch with a goal two minutes before the final whistle to break a 2-2 tie and secure her team’s win over the dck Masters on opening day of the 2012 Bud Light Women’s 7-A-Side League at the Guam Football Association facility in Harmon.

[Photo: The dck Masters’ Jaime Fahy keeps control of the ball with a header as she moves forward toward the goal in an opening day match of the 2012 Bud Light Women’s 7-A-Side Soccer League Sunday at the Guam Football Association facility in Harmon. The Lady Strykers defeated dck 3-2.]

The Lady Strykers switched gears in the second half, scoring the three goals the team needed to overcome a 2-0 advantage the Masters held by halftime.

Barbe opened scoring for the Lady Strykers capitalizing on a one-on-one opportunity with dck’s goalkeeper Jamie Skornia five minutes into the second half. Skornia initially came out of the box to approach Barbe, but at the last minute retreated. By the time Skornia decided to again approach the ball, Barbe was able to send her shot to the back of the net.

The Lady Strykers’ Caroline Quigley scored the game equalizer just a minute later, taking a pass from Barbe on the right side and shooting successfully to the opposite post.

After over 20 scoreless minutes, the Lady Strykers found their best opportunity to break the tie when Mia Santos passed the ball to Barbe who was unmarked near the left wing. Barbe avoided Skornia’s slide tackle in front of the goal to send in her shot successfully for the eventual game-winner. The game – played in a two 30-minute half format – ended before the Masters could manage a second-half goal.

The Masters initially held a 2-0 lead on a pair of Jaime Fahy goals in the 8th and 19th minute before the halftime whistle.

In other matches, the Doosan Crushers shut out Pika Soccer Club 10-0. Anjelica Perez finished with a hat trick and teammate Kristin Thompson scored twice. Andrea Odell, Tatyana Ungacta, Simie Willter and Kim Sherman also scored for the Crushers. The Crushers’ other goal came on a Pika own goal right before halftime.

Quality Distributors was the day’s other winning team after Guam Shipyard forfeited its first game.

League matches continue Saturday at 2:15 p.m. at the GFA mini pitch when the Lady Strykers take on Shipyard. Quality goes up against the Crushers at 3:30 p.m. and Pika faces Hyundai at 4:45 p.m.