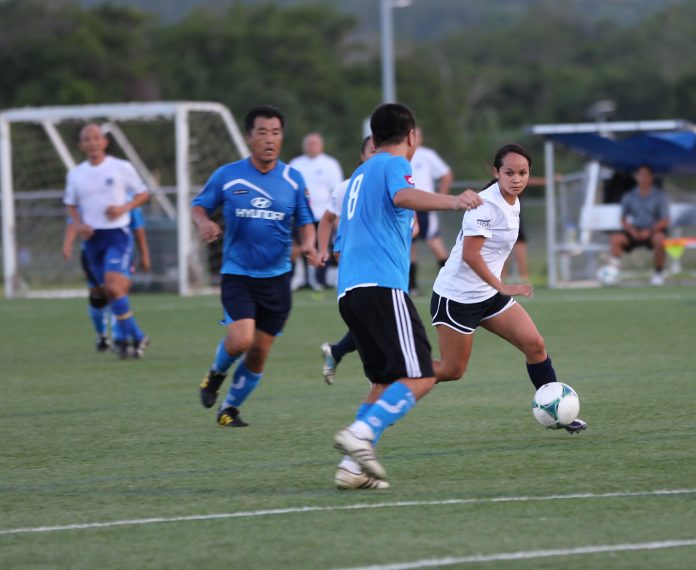 Harmon, Guam – The Paintco Strykers’ Kim Sherman leads the Golden Boot race in the 2013 Bud Light Masters Co-Ed Soccer League after tacking on a pair of goals to her tally in her team’s 7-1 victory over a shorthanded Hyundai FC in Week 3 action at the Guam Football Association National Training Center.

The Strykers, currently the league frontrunners, opened scoring early in the first half. Hyundai FC goalkeeper Yim Yeon Soon was able to swat away a corner kick by the Strykers’ Kevin Knaeble, but Bobby Torres regained possession of the ball and sent it to Julio Gonzales for the score.

Hyundai FC later knotted the game on a beautiful free kick by Se Lim from the right edge of the penalty box that sailed over the Strykers’ keeper to the opposite post. Moments later, the Strykers were back in the driver’s seat when Knaeble connected on a Kyung Shipman pass that just curved into the upper left corner of the goal, shocking Yim, who had thought the ball would go out.

The Strykers later extended their lead after Sherman connected on a Susumu Morimoto cross before the halftime whistle.

[Photo: The Paintco Strykers’ Alexy Barbe looks for options as she carries the ball up toward the goal in a Week 3 match of the 2013 Bud Light Masters Co-Ed League at the Guam Football Association National Training Center. The Strykers defeated Hyundai 7-1.]

Sherman scored another goal in the second half and teammates Makoto Suzuki, Alexy Barbe and Rod Hidalgo added a goal each for the final score.

In the day’s late game, the Rovers FC defeated IT&E/IP&E 2-0 to earn its first win in the league.

Both teams had difficulty early on finishing plays, but the momentum shifted in favor of the Rovers after an IT&E/IP&E handball violation in the box. The Rovers’ James Oh sent his shot past IT&E/IP&E starting goalkeeper Kevin Elwell to break the scoring ice in the 14th minute.

The Rovers later added an insurance goal one minute into the second half as Carlos Barajas made a remarkable run through the center of the attacking third and slotted his shot past IT&E/IP&E second half keeper C.Y. Leung.

IT&E/IP&E next play Hyundai FC at 6 p.m. Saturday, with both teams looking for its first win in the league. IT&E/IP&E has the slight edge over Hyundai, as the scoreless draw against the Strykers in Week 1 gave the team one point in league standings. In the day’s late game, the Strykers will take on Big Blue, the only other undefeated team in the league, with kick off at 8 p.m.